Boys Commitments: From the snow to the sand It was a very happy holiday season for the UC Santa Barbara coaching staff. U.S. youth national team pool player Kostandin Moni gave them reason to celebrate with his verbal commitment to the Big West powerhouse at the end of Dec.

“It's a top level team with a top environment that I see could improve my game a great amount,” Moni told TopDrawerSoccer.com. “I love the passion that the fans bring to the incredible Harder Stadium and I don't think anyone has any complaints about being in sunny California.” 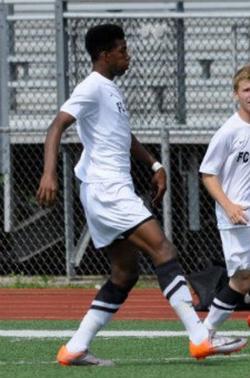 Moni, who has appeared with the U.S. U15 Boys National Team in the past, currently plays for Crew Soccer Academy Wolves U16 in the Mid-America Division of the Development Academy. Wolves are second in the division with a 8-3-4 record while Moni has featured in 12 games and scored three goals.

The technical player, who used to be easy to spot thanks to his fluffy curls of hair, could feature in a number of roles with the Gauchos when he arrives in Isla Vista in 2015.

“I think I'm a versatile player that hasn't ever had problems adjusting to any environment or team but the fast, technical game the Gauchos play will be great for me,” Moni said.

He is the third player from Michigan in the past five years to give his word to the Gauchos joining current sophomore Adam Carn-Saferstein and 2014 recruit Ahinga Selemani.

“It's great to play with players you're familiar with but my decision was completely individual,” Moni replied when asked about the pipeline from the snowy roads of Michigan to the sandy bike paths of Santa Barbara.

UCSB beat out Michigan State, Georgetown, and Wake Forest for Moni’s commitment. He is the first verbal commitment for UCSB’s 2015 class.

A physical and athletic center back for the Philadelphia Union Academy U18 squad, heading south ended up being the right fit for Bradford Jones.

“I decided to commit to USF because of the great academic and athletic program they offer,” he told TopDrawerSoccer.com. “It also helped that one my teammates had already committed there too, which would ease the transition from high school to college.”

While there was plenty that he came to like about the program, Jones was first drawn to it by the squad’s diversity, as they tend to attract players outside the United States.

“The team has players from all around the world who all have different styles of play that I can learn from,” Jones said. “I also liked the way the team played out of the back. The back four are a huge part in the offensive play and that was a major factor in making my decision.”

Academically, things lined up for him off the field as well.

“I plan on majoring in business and the business school is one of the best programs they offer,” he said. “The campus is also really beautiful and the weather is amazing.”

Other commitments:
Forward Mark Segbers (St. Louis Scott Gallagher) has committed to Wisconsin for the class of 2014.

Forward Emmanuel Usen (Houston Dynamo) has committed to IUPUI for the class of 2014.

Defender Steven Gandy (D.C. United) has committed to Virginia for the class of 2014.

Forward Elochukwu Ozumba (Houston Dynamo) has committed to Northwestern for the class of 2014.