A goalkeeper who thrives as the last line of defense, Hunter Harrison was swayed to make his commitment to Oregon State by head coach Steve Simmons. 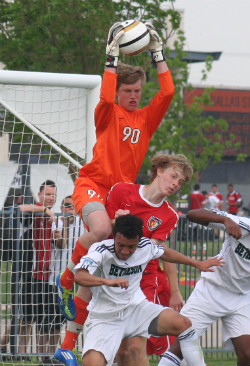 “Ultimately, it came down to the coaching staff,” Harrison told TopDrawerSoccer.com. “I mean, I love the campus and the school, but something just felt right with the coaches. I feel comfortable with them already and I know that they will help me to grow as a player, and I want to win for them.”

Harrison hopes that he can help the team qualify for the NCAA tournament while playing for the Beavers. Along with a confidence in the coaching staff, the campus inspired a sense of comfort for the Texas native.

“Compared to the other schools that I have visited, the campus felt like home,” he said. “There was just something that drew me in the minute I walked on campus and I know that I am going to get a great education.”

The chance to commit to a DI program offered Royer, a versatile player who can slot in at just about any position outside of goalkeeper, the opportunity to fulfill a dream of playing soccer at the highest collegiate level possible.

“I met the assistant coaches, coach Mike Ditta and coach Chris Volk, through ODP and they were very interested in me,” Royer told TopDrawerSoccer.com. “They got me up to campus for an official visit where I got to officially meet Coach Kuntz. After watching them beat UCLA, I got to stay the night at the beach houses they live in at Newport Beach. The guys were all super nice and it felt like a family I'd like to be a part of. It is a perfect fit for what I'm looking for.”

The team’s playing style caught the eye of Royer, who also liked his opportunities off the field.

“It's not only a big time DI soccer program, but it carries a high value on academics, which are really important for me and my future,” he said. “I also love the location of it. It's close enough to home that my parents can watch me play and close enough to the beach where I can spend time relaxing.”

Defender Sam Moffatt (Richmond Strikers) committed to VMI for the class of 2014.

Midfielder Jesus Bolivar (Soccer Academy of the Americas) committed to North Carolina for the class of 2014.

Midfielder Michael Cusack (Houston Dynamo) committed to High Point for the class of 2014.