Boys Commitments: Heading all over It’s no shock to see where Zach Neiberger, a Minnesota native, wanted to play soccer in college. It ultimately panned out the way the defender hoped. 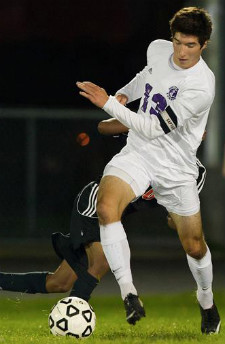 “I've always looked to play my college soccer in California,” he told TopDrawerSoccer.com. “I attended their summer camp last year and immediately felt comfortable with the university and the coaching staff. To be able to go to school in great city like San Diego and compete in the Pac-12 is an opportunity I couldn't pass up.”

The soccer team’s environment impressed him, as he knows that he will be challenged by the rigors of the Pact-12 program.

“It's a very professional atmosphere, and it gives me the opportunity to further develop myself as a player and person,” Neiberger said.

The school offers a strong business program, and the campus is beautiful. It's a great place for me to excel both academically and athletically.

A goalkeeper who thrives on the challenges and demands presented by the position, Bjorn Kammholz was intrigued at the prospect of heading north during his college search.

“One of my goals has always been to play Division I soccer, and during the recruitment process, Boston University stood out to me. The athletic, academic, and social sides of BU were all extremely appealing. Once I was able to visit the campus in person and meet the coaches and players, I knew that Boston was the right fit.”

The school’s success in conference play certainly stood out to Kammholz along with the program’s facilities.

“BU's soccer program has a long history of excellence, which includes being seven-time conference champions,” he said. “One of the main reasons is the experienced coaching staff. From the moment I stepped on campus, I could sense the professionalism of both the coaches and players, but at the same time, there was also a relaxed feel to it all. Coach Roberts and Coach Black made me feel welcome, and from watching the training sessions, I could tell that they knew what they were doing."

Academics played a large factor as well, and Kammholz was looking for a soccer program that teamed with quality academic opportunities. It was something that Boston University offered in spades.

“I found the perfect balance at BU,” he said. “My intended major is business, and as BU's School of Management ranks among the top 25 programs in the nation, it is an excellent fit. Additionally, my preference was always to attend a large school with ample social opportunities, and since BU has around 15,000 undergraduates and is right in the middle of Boston, there is always something to do. I look forward to be able to attend concerts and professional sporting events at historical places such as TD Garden and Fenway Park.”

Angelo Materia is the kind of player who values the ball. A midfielder who takes pride in his intelligence and vision, picking a Division III school that offers a competitive program at its level.

“I decided to commit to Connecticut College because it's a great soccer program that's is continually getting better and I can see us competing for the national championship. I also liked that we play in the most competitive conference in D3,” Materia said.

Strong academics were another plus, along with the way the team approached the game.

“Everyone knew their roles and all had a giant emphasis on playing the ball quickly and keeping it,” Materia said. “I liked the intensity of the practices and I was impressed by their performance in the game. I liked the school because it was very apparent that everyone was focused on their academics and the small student size is something that I prefer.”

Forward Alex Simon (Real So Cal) committed to Harvard for the class of 2014.

Midfielder Tanner Hummel (Georgia United) committed to Kentucky for the class of 2015.

Forward Felipe Liborio (Strikers FC) committed to Temple for the class of 2014.