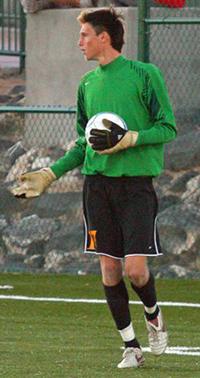 Reason: “I chose UC Irvine because I was interested in a top 25 soccer program in California that has a strong academic emphasis. I could really see myself progressing in this program and they are successful in producing professional level goalkeepers. I visited the campus a year ago with my parents and was impressed.”

Farmer is a 6-foot-5 goalkeeper who knows how to use his size and quickness to shrink the goal. But Farmer’s resourcefulness doesn’t end on the field. He was aided in his recruiting process by a website he made showcasing his skills. The exposure earned him a tryout at Real Salt Lake, and ultimately an offer from UC Irvine.

“The website had all my highlights, and we also took them and posted them to YouTube,” Farmer said. “So during my recruiting process, we just sent the links to coaches and didn’t have to worry about DVDs. It was very effective."

Reason: “Oral Roberts was exactly what I was looking for athletically, academically, and socially. I felt very welcome and knew within the first day of my visit that I wanted to play there. I visited several schools and I enjoyed my visit to Oral Roberts more than any other.”

White is an attacking player who thrives best on the outside. He loves the challenge of taking the ball at defenders and trying to finish. While late to the recruiting process, White said his performance at the Region IV ODP camp last summer bolstered his confidence and intensified his search for a program.

Reason: “Dallas Baptist wasn't very high on my list at the beginning of my recruiting process, but when I took my official visit there I was sold. Their campus was exceptional, the players I talked to were all very welcoming, and Coach (Chris) Crawford was like no other coach I had met. I didn't feel like he just wanted my talent. He made sure he knew the type of person I was before having me tryout.”

Beltran, a goalkeeper, is joining a brand new program this season meaning he has a chance to help build a new legacy. He’s a very coachable player who always looks for the details to help him develop.

Reason: “There are over twenty Wright State degrees in my extended family and the school is close to home for me, which means family and friends will be able to see me play more often.”

A defensive player who takes pride in challenging attackers, Stovall is also sneaky good on throw-ins.

Cameron Knox (Indiana United Fire) has verbally committed to IUPUI for the 2013 season.

Evan Smith (South Central Select) has verbally committed to IUPUI for the 2013 season.

Sam DeRoy (Ohio Premier) has verbally committed to Wright State for the 2013 season.

Andrija Novakovich (Muskego, Wisconsin) has verbally committed to Marquette for the 2014 season.