Amidst a couple of weeks in Frisco, Texas, for the Development Academy Playoffs and a training stint with the FC Dallas Academy, Weston FC midfielder Javier Clavijo made up his mind.

He verbally committed to UCF in July, meaning college soccer won’t take him too far away from his south Florida home.

“I loved the campus, soccer program, and academic support, but most importantly my chemistry with the coaching staff was strong from the time they first contacted me,” Clavijo wrote TopDrawerSoccer.com in an email. 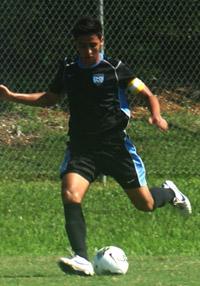 The recruiting coup had a lot to do with head coach Bryan Cunningham and Mauricio Ruiz, who impressed Clavijo throughout the recruiting process.

“They really did their homework and kept an eye on me early on, especially during the last two years as I got closer to my college years,” he said. “My unofficial visit to UCF last March allowed me to confirm what I have heard about the program but more importantly it allowed me to learn about where it was going. I know that I’m heading to a very special place and playing for them will make me grow as a soccer player and as an individual.”

Staying close to home wasn’t too high on his priority list, Clavijo said, but this was more about finding the right place to play and attend school.

The team’s expected move to the Big East in 2013 – his freshmen year – also factored in to his commitment.

“It is a very strong conference that will allow me to maintain a high level of play,” he said. “Also, the fact that the last two years the team has made NCAA tournament appearances motivates me for continuing success. I can tell that UCF is a program that is hungry for a National Championship.”

Another player is joining the new look ACC.

Kenny Lassiter, an outside midfielder for Philadelphia Union affiliate FC Delco, committed to Syracuse this summer.

“I felt that it was a perfect fit for me,” Lassiter wrote TopDrawerSoccer.com in an email. “When I visited the coaching staff made me feel very comfortable with everything. The campus was very nice and I had an all around great time.”

Needless to say, the lure of ACC soccer played a huge role in Lassiter’s decision, and he’s very much looking forward to the chance of competing at such a high level.

“I am very excited to play in the ACC,” he said. “Since it is one of the best conferences in the country, I know that it is going to be very competitive. I look forward to playing against some of the best competition, and just improving my game and becoming a better player.”

Patrick ‘P.J.’ Koscher got it all with his commitment. He is staying close enough to home that the family can regularly see a game and he is going to a very strong program that is building for the future.

“Georgetown offers everything I wanted in a college: great academics, a solid Division I soccer program, an excellent location, and a beautiful campus,” Koscher told TopDrawerSoccer.com. “Coach Brian Wiese and his staff made me feel comfortable in the recruiting process. I admire their passion toward the game.”

Koscher was the leading scorer for the Baltimore Bays Chelsea U16 squad in the Development Academy. The midfielder scored 16 goals in 20 starts.

“I am definitely excited for Georgetown to be my home for the next four years,” the senior-to-be added. “When I visited, I felt the players and coaches had great chemistry and made me feel right at home.”

A target forward with good speed, Justin Galiani liked what he saw from Bucknell, his school of choice.

“I was really impressed with the combination of academics and successful soccer they have had,” he wrote TopDrawerSoccer.com in an email. “Visiting the school and seeing everything it had to offer made the decision even clearer for me.”

Competing for conference champions in the Patriot League on a regular basis of late also attracted the goal poacher who has been playing club ball in Northern Virginia.

“Winning two out of the last three Patriot League titles speaks for itself,” he said. “Who doesn't want to be part of a championship team?  They also had some of the best facilities I've seen and a beautiful grass field that every soccer player would love to play on.”