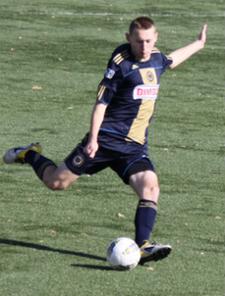 After narrowing down a list of top programs, Todd Pratzner decided that verbally committing to Xavier and joining the rising power in the Atlantic 10 was the right decision.

“Xavier was the best fit for me both for soccer and academics.  I am excited about playing for the Atlantic 10 Champions the last two years.”

A starting center back for the U18 PA Classics – a development partner of the Philadelphia Union’s youth program, Pratzner represented the Union at last summer’s Generation adidas Cup in Frisco, Texas and has played in reserve games for the first team.

He has plenty of experience and will be a strong addition to next fall’s incoming class as Xavier’s head coach Andy Fleming continues to build something special.

A defender in Wisconsin, Driton Zyteja isn’t going to stray too far from his club team after verbally committing to play for Marquette.

The program and school strongly appealed to him as he went through his college search.

“Marquette's great history and reputation in the academic and athletic fields stood out to me as a great choice to continue my learning and play,” Zyteja wrote TopDrawerSoccer.com in an email.

Zyteja took a liking to the coaching staff led by Louis Bennett and assistants Steve Bode and Marcelo Santos, while also liking the direction the program seems to be headed in.

“The coaches and players currently at Marquette made it very easy to make my decision and attend their school,” he said. “Them winning the Big East championship this past year really stood out also. It is in a great city, and I believe I will fit in, academically, athletically, and socially.”

A strong sense of familiarity led Erik Clark to make the commitment to attend the College of Charleston.

Clark has known head coach Ralph Lundy and assistant Troy Lesesne for over ten years, and his level of comfort of them was very strong.

The school’s location didn’t hurt either.

“The school is incorporated with downtown Charleston, which makes it a very social and interactive school and has a historical background to it,” Clark wrote in an email to TopDrawerSoccer.com. “It has a very good educational program and many majors and minors that are very interesting and the classes have less students and will make it easier to learn and have a teacher/student conversation.”

The program’s facilities and conference also strongly appealed to Clark, who is eagerly anticipating to join the team in the fall of 2013.