A sense of familiarity helped draw Wyatt Fabian to make his verbal commitment to Lafayette. 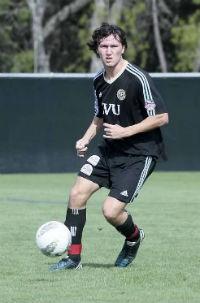 “I felt that Lafayette was a perfect combination of what I was looking for in a college, high academic standards with a strong Division I soccer program,” the defender told TopDrawerSoccer.com. “The small liberal arts school atmosphere is something I feel really comfortable with coming from The Hill School, a small prep school. Lafayette is one of the best Liberal Arts colleges in the country and it's small friendly community really appealed to me.”

Head coach Dennis Bohn, who has been at the helm of the program since 2001, operated the sort of soccer environment that Fabian was searching for in particular.

“I was really impressed with the professional atmosphere that Coach Bohn and his staff have created at Lafayette,” he said. “The program has been very successful over the past years including a Patriot League Championship this year and I believe they will continue on with this success into the future.”

An attacker who has slowly but surely climbed the ranks at the Fire’s Academy, U16 leading-scorer Alex Underwood put his college future to rest with a recent commitment to Denver.

“I chose Denver because of the great options it provides me both academically and athletically,” he told TopDrawerSoccer.com. “Academically, their undergraduate business school is one of the best in the country, and this was something that was very important to me throughout my process.”

Listed as a forward, but able to play as an outside midfielder as well, Underwood brings an attacking verve to the offense, and can finish opportunities as well – he has 12 tallies on the season.

Along with the opportunities he spotted at Denver, he thinks it will be easy to adjust to the new team in 2014.

“Athletically, I really felt very comfortable with the staff and the team when I took my visits there this year,” Underwood said. “I fit in very well with the system they play and I feel that their brand of soccer is among the best at the college level. The program has achieved great success in the past and is poised to achieve even better things in the future.”

While his commitment dates back to December 2012, the chance to continue to play for one of his club assistant coaches (Brian Ainscough, who is Northeastern’s head coach), Harrison Swartz had plenty of other things draw him to the school.

“I have committed to Northeastern University for a number of reasons,” he told TopDrawerSoccer.com. “The first is that NU is a great school with a campus right in the heart of Boston, one of the greatest cities in the world. The co-op program allows students to get actual work experience while attending college…this past year the Huskies had their best season ever and I hope to help continue their success on and off the field.”

Swartz, whose 17 goals in 24 games lead his club team, will look to bring that offensive punch to the Division I ranks in a little more than a year.

Defender Justin Fiddes (San Diego Surf) committed to Washington for the class of 2014.