The 2014-15 Development Academy season has started off well for Sean Bowman, who leads Seattle’s U18 side with 11 goals on the season.

His recent success attracted the attention of a number of Division I programs, but Bowman eventually settled on San Francisco, a West Coast Conference team on the rise. 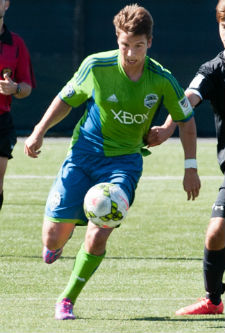 “In the end the coaching staff, location and the excitement of making a difference at USF was the deciding factor,” Bowman told TopDrawerSoccer.com. “I could not be more excited to be heading to USF, an all around great place to go to college while having an amazing athletic and academic experience.”

Former UCLA assistant coach Eddie Soto took charge of the program this past year, leading the team to its first winning season since 2006, which helped trigger Bowman’s decision.

He’s the fourth verbal commitment to San Francisco for 2015.

A standout goalkeeper on DeMatha, one of the best high school programs in the D.C. metro area, Keegan Meyer found a home away from home at High Point.

“I decided to commit to High Point because I felt like I was a part of their family when I visited and I believe the coaches and players can push me to make me a better player,” Meyer told TopDrawerSoccer.com. “I can’t wait to keep building on my strengths at High Point.”

Meyer, a technically proficient goalkeeper comfortable playing out of the back, found a program with a friendly vibe.

“I really liked how welcoming the coaching staff and players were,” he said. “I really enjoyed the atmosphere High Point had and I can’t wait to be a part of that atmosphere.”

Three players are verbally committed to High Point for 2015.

An attack-minded midfielder who likes to try and control the tempo of the game, Thailer Usonis tries to emulate Spanish legend Iniesta, playing one-two touch soccer and combining with his teammates.

Nashville-based Belmont is set to be his next stop in 2015.

“I decided to commit to Belmont after my second visit there because it was the best fit for me,” Usonis told TopDrawerSoccer.com. “I visited several colleges but felt a connection with the coaching staff and team. I did not want a small school but didn’t want a large school either so Belmont was perfect.”

The program’s style of play stood out to Usonis as well, as he saw a team that keeps the ball on the ground and build through the midfield.

“[Head coach Bryan Green] said he was looking for technical soccer players not big athletes and that’s what I am,” he said. “The best thing about the program was that Coach Green is rebuilding his team. With a new coaching staff, Coach Green, coach Carr and coach Morris, I see a bright future with this team and I decided I wanted to be a part of it.”

Talking to new players at Belmont also piqued his interest.

“[They] spoke highly of the new staff and they we are very excited about a new beginning. I also felt a connection with the players, as they were very welcoming during my stay there. Also with the competition, Belmont has tough competition as they play top schools around the country as they played South Carolina and Kentucky this year.”

Usonis is the first reported verbal commitment to Belmont for 2015.

Forward Michael Marchionna (Sockers FC) committed to Valparaiso for the class of 2015.

Midfielder Ruben Sanchez (Chicago Magic PSG) committed to Marquette for the class of 2015.