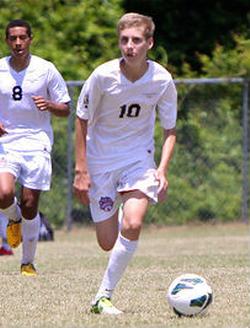 A center back standing at 6-foot-4 for his Crossfire Premier club team, Nathan Aune didn’t have to look past a local program for his future college home.

“I committed to Seattle University because I felt it was the perfect school for me,” he told TopDrawerSoccer.com. “I had a connection with the coaches and I felt they wanted me to be there as much as I wanted to be there. I like the coaches a lot, and I am impressed with the way the team plays. Also, the players are all good people, and are well liked on campus.”

Along with that, Aune found that the academic opportunities fit what he was looking for in the classroom.

“The school offers a great education, and the classes are small so I can personally connect with the professors,” he explained. “I like that the school is in a big city but I still feel like I am on a college campus. Also, from what I heard the food is fantastic which is always a positive.”

Staying close to home was another important element of the search, as he liked the idea of friends and family having the chance to see him play.

A standout shot-stopper and strong communicator at the back, attending Stanford has been a dream of Pierce Ashworth’s since he was young.

On the cusp of his final year of high school, Ashworth will realize that goal next fall when he joins the Cardinal men’s soccer program.

“I decided to commit to Stanford because it is, in my opinion, unmatched as far as being an incredible academic institution with a phenomenal sports program," Ashworth told TopDrawerSoccer. "The coaching staff is incredible: Jeremy Gunn, John Smith, and Nick Kirchhof have done an unbelievable job with the team and I am excited to work with Ben Graham as the goalkeeper trainer. My twin brother, Hunter Ashworth, is committed to play soccer at the University of San Francisco and I'm happy for both of us to be in the Bay Area.”

Ashworth also noted the team’s significant progress under Gunn, who took over in December 2011, something he wants to be a part of over the next few years.

“Since Jeremy Gunn took over as the head coach there has been nothing but rapid improvement and I hope to win a national championship in my time at Stanford,” he said.

The goalkeeper plans on looking into the school’s Institute of Design to engage world issues, one of many appealing aspects of the educational opportunities.

“Stanford as a school is just as attractive to me,” Ashworth said. “There is nowhere in America that has the same magnitude of new ideas and free thinking coming out of a single place.”

A target forward with aerial prowess, Mark Forrest jumped at the chance to join the Patriot League program in the back yard.

“I decided to commit to Lehigh because I loved the feel of the campus and the feel of the soccer program specifically, more so than any other school I visited,” Forrest told TopDrawerSoccer.com. “The strong academics were also a huge factor for me.”

A left-footed midfielder who is calm, composed and creative in the middle of the park, the College of Charleston was the right fit for Jeffrey Frantz in a variety of different ways.

"I feel the College of Charleston is the perfect combination of what I was looking for in a college,” Frantz told TopDrawerSoccer.com. “It offers high academic standards with a strong Division I program that complements my style of play. The fact that it is located in a historical city where I have many family memories was icing on the cake. It offers all the tools for me to succeed both in soccer, and in school.”

A huge respect for the coaching staff, along with a connection with the current players made it all the easier to choose the school, not to mention having spent time in the city while growing up.

“I have many family memories in Charleston, so the city has special meaning to me,” Frantz said. “It offers a very strong business program, and the size of the school is perfect. I like the urban environment, history and architecture the College of Charleston offers.  Being just five hours from Atlanta will allow my family to watch me play.”

Defender Aidan Wixted (Orlando City) committed to NC State(m) for the class of 2015.

Forward Luke Treadway (Cincinnati United Premier) committed to Kentucky for the class of  2015.