Two big-time high school juniors discuss their commitments, and taking their games to the next level in college. 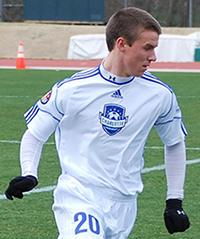 The current NCAA National Champions North Carolina picked up industrious midfielder Roland Minogue when he made his verbal commitment to the program earlier in the year.

The Carolina resident liked everything he saw both on and off the field when he picked the Tar Heels.

“I chose UNC Chapel Hill due to the combination of the outstanding academic environment and tremendous soccer program with a great and successful history,” he wrote TopDrawerSoccer.com in an email. “These pieces provide me a tremendous opportunity for growth as a student, soccer player and ambassador for the University of North Carolina.”

A box-to-box midfielder who plays on Charlotte Soccer Academy’s U18 Academy side, Minogue also cited the program’s reputation for producing and developing players for the next level as very appealing.

He’s also eager to get challenged at a higher level in an extremely competitive environment.

“I train like I play so I am looking forward to having the opportunity to compete, learn and develop with some of the best players and coaches in the country,” he said. “I have always thrived in competitive situations and believe that this new chapter of my soccer career will push my game to the next level.”

It was meeting the Rutgers’ coaching staff that helped seal the deal for Erik Sa.

“I was very excited about the coaching staff as soon as I first talked to them,” Sa told TopDrawerSoccer.com. “They did a great job of communicating with me and keeping me up to date through the whole process.”

The gifted New York Red Bulls U18 attacker, who previously played for Players Development Academy, was also impressed by the style of play from the Scarlet Knights.

“Not only is Rutgers a very good academic institution, but I believe that the coaches there will help me get to the next level as a player,” Sa added.

“The recruiting process is something that I enjoyed this year for the most part,” Sa said. “It can get a little overwhelming at times because there are so many tough decisions to make, but it is also something to take advantage of. Visiting schools and talking to coaches is something that you’re only going to experience once in your life so making the most of it is important.”

The 17-year-old also said that the support of his family and coaches “made it easier to decide and be very happy with that decision.”