When it came time to make his college decision, Jeremy Keckler was looking for a place that would help him improve both on and off the soccer field.

Ultimately, it led him to a particular New York program. 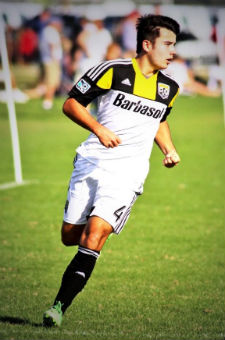 A goalkeeper who constantly looking to improve himself, the presence of a full-time GK coach was a huge draw to Keckler, as it highlighted one of many things he liked about the coaches at the America East school.

“The coaching staff is knowledgeable, personable, dedicated, and pushes it players to be as best as they can be,” he said. “On top of this, the entire coaching staff was well organized and had clear goals with plans of action for each session and for each week of training. This is the type of organization that I am used to at Oakwood. Furthermore, the facilities are superb. All of the training facilities are new and/or in good condition which makes for a great training environment.”

Aspirations in the classroom sealed the deal for Stony Brook.

“Stony Brook can provide me with a great education in any subject of engineering that I chose,” Keckler said. “More specifically, I like that I can graduate and in 5 years with a masters degree in my field with a good outlook for job placement. Also, the school is big on their research programs which I would like to experience first hand.”

A hard-working, athletic midfielder for FCX, a club based in Illinois, Adam Cloe targeted Drake from the start of his college search.

“I'm excited to play in the Missouri valley Conference and Des Moines will be a great city to grow in,” he told TopDrawerSoccer.com. “They play a possession-based game, which will be conducive to my success in the long run. I liked the coaching philosophy of both Gareth Smith and Sean Holmes. Also, I like the fact that it is a small population school but still offers division one soccer.”

The mentality of the coaching staff during the recruiting process was another draw for Cloe.

“Most Division I coaches emphasized academy clubs, but drake was concerned with me as a player and a person which I liked,” he said. “I'm very excited to get to the team and see what I can contribute.”

A defender who has 22 appearances during the current Development Academy campaign, Shae Smalley found the right fit in the mountains of Colorado.

“I decided to commit to Denver because of its great accolades as a school along with its solid soccer program,” Smalley told TopDrawerSoccer.com. “The coaches were great on the unofficial visit and the players definitely made it seem like a welcoming environment. I had a feeling walking away from the visit that that's where I saw myself going, and I'm extremely thankful to be a future Pioneer.”

Smalley is the fifth verbal commitment to Denver for the class of 2015.