A relaxed player on the field, Phillip Grossman does his best to try and help his team keep the ball and looks for pockets of space to open up the opposing defenses. 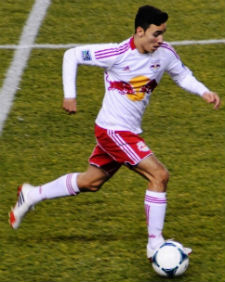 He didn’t have to look far from home for the right Division I college fit.

“After going on some visits, I was ready to make my decision,” Grossman told TopDrawerSoccer.com. “Old Dominion had everything I was looking for. From top-level soccer to the major I would like to pursue, Exercise Science, it seemed to be the complete package. I also really liked the coaches and how much they expressed their trust for one another.”

ODU’s ability to consistently compete at the DI level, with appearances in 10 of the last 12 NCAA tournaments, also caught Grossman’s eye during his college search.

“I was able to catch one of the spring games and enjoyed the style of soccer they play,” he said. “I could see myself fitting in to their system. Also, ODU has a soccer specific complex on campus in which the coaches’ offices, team room, locker room, practice field, and game field are all together. Lastly, Conference USA is quickly competing to be one of the top soccer conferences in the country and I'm excited to be a part of it.”

Moving closer to the beach (ODU is a 20 minute drive away from Virginia Beach) was another big plus, not to mention his plan to pursue a degree in Exercise Science.

Grossman is one of two reported verbal commitments to ODU’s 2015 recruiting class.

A midfielder for the New York Red Bulls U16 Development Academy side, Breno Lustosa is a creative center mid who like to contribute at both ends of the field.

He didn’t have to look to far from his current home for his future college.

“I decided to commit to Stony Brook because I felt very comfortable with the atmosphere and could easily imagine being successful there,” Lustosa told TopDrawerSoccer.com. “They have a great balance between athletics and academic, and overall it felt like a good place to start building my future as a player and person.”

The America East program has made significant strides over the past few years, and the program’s robust trajectory stood out to the midfielder. Lustosa also hit it off with both the coaches and players during his visits.

“I got a few chances to meet the players and they were quick to treat me like family,” he said. “The coaches are fantastic and put a lot of time, effort, and passion into what they do, and we share similar goals and objectives for the future.”

The educational opportunities sealed the deal.

“The school itself is very strong academically and that was a big part of my decision,” Lustosa said. “I wanted to make sure academics came first, and Stony Brook didn't disappoint.”

Two players are verbally committed to Stony Brook for the class of 2015.

Midfielder Joel Rodriguez committed to Massachusetts-Lowell for the class of 2014.

Goalkeeper James Knoebel (DC United) committed to Old Dominion for the class of 2015.