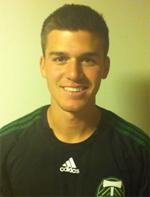 Utah Valley is still another year away from its first season of men’s college soccer in Division I, but it’s already landed its first four-star recruit.

Utah-native Lucas Cawley verbally committed to the Wolverines last week in perhaps one of the big surprises from the class of 2014.

“Personally, there are a lot of things that this college can provide for me,” Cawley said. “Helping me reach my goals in soccer and hopefully playing professionally someday, playing in a high level soccer environment every day, and getting to play back in my hometown.”

Cawley spent last season with Real Salt Lake-Arizona’s residency program in Casa Grande, Arizona. This season, he is playing with the Portland Timbers U18 squad after training in England over the summer.

“I'm very excited to return home to Utah to play college soccer,” Cawley continued. “Not only personally was it an easy decision but it was great for my family to have me be able to come back home and play. Up until a few months ago I did not think this was a possibility. I'm very excited to have their support at my games as I start playing my freshman year at UVU.”

“Greg has always been one of the best coaches I've ever had as a youth player on the Utah ODP Team,” he said. “The number one priority when choosing a college for me was first the coach. This is where Greg came in. Instantly I had a coach at a perfect college that I knew, trusted, and loved as a player and friend.”

It’s never surprise to see a Bay Area recruit stay close by, especially when that destination is Stanford.

“I decided to commit to Stanford for many reasons,” he told TopDrawerSoccer.com. “The character and personalities of the coaches and the focus they have for the direction of the soccer program is incredible.

“From the times I spent on campus prior to my commitment the atmosphere and environment along with the camaraderie I felt from the team was something that drew me to Stanford.”

Gunn’s presence there was also part of the draw, as the former Charlotte head coach is currently aiming to steer the squad back into the realm of Pac-12 contention.

“Along with one of the most outstanding academic environments in the world, the mindset and vision that Coach Gunn has for the program was something that really sealed my decision,” Liua said.

Forward Zhuvonte Wilson (Charlotte Soccer Academy) committed to Charlotte for the class of 2014.

Midfielder Ethan Cartwright (Vardar) committed to Colgate for the class of 2014.

Midfielder Aaron Tabler (Columbus Express SC) committed to DePauw for the class of 2013.

Midfielder Campbell Wood (Highland Football Club) committed to VMI for the class of 2014.