An attacking player with the speed to get behind opposing defenses, Spencer Held’s approach is simple: help his team win games.

Whether that’s scoring goals or setting them up, he looks to help his team in whatever way possible. Starting next fall, his team will be Syracuse, as he committed to the program after a recent visit. 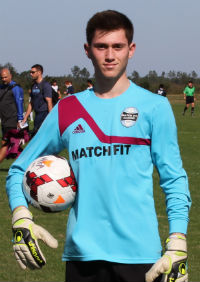 “I decided to commit to Syracuse after I visited the campus this past weekend,” Held told TopDrawerSoccer.com. “The coaching staff is awesome, the academics and specifically the business program is nationally ranked, and the school spirit at the games is unbelievable. I loved everything about the campus and I am so excited to play for Syracuse University.”

Head coach Ian McIntyre has taken the program to a No. 3 ranking in the TDS Top 25 this season, and it was the quality of the team that caught Held’s eye.

“My favorite part about the soccer team is the high level of soccer that the team plays,” he said. “In arguably one of the toughest conferences in the nation, each team has to battle each and every day to play the best level of soccer to win games. Syracuse definitely plays a very high level of soccer and the competitive spirit is a huge part of why I wanted to go there.”

He also liked the location, and isn’t afraid to exchange the weather of California for the harsh winters of upstate New York.

“The school is in a great location in the heart of Syracuse, New York,” Held said. “The weather will be very unique, since I grew up and have lived in sunny southern California for my entire life. However, I really wanted a change in scenery and Syracuse definitely offers me that. As well, the academics were a very important part of my decision. I thought the structure of the classes, the high-ranked programs and overall enjoyment of the students were critical in my decision.”

Held is the sixth verbal commitment to Syracuse's 2015 recruiting class.

Historically speaking, New Jersey has produced some of the nation’s best soccer players.

So it’s never a surprise to see local products like Brian Shushkovsky opt to join an ever-improving Rutgers men’s team for the fall of 2015.

“I decided to commit to Rutgers because of its growing reputation both on an off the field,” he told TopDrawerSoccer.com. “Its addition to the Big 10 was a huge plus both academically and athletically and played a role in my decision.”

Shushkovsky, a goalkeeper who enjoys taking command in the penalty area, thinks the school also sets him up well for the future by offering up a quality education in his field of interest.

“My academic opportunities at Rutgers would be almost endless and seeing as I'm interested in business, its business school and 5 year MBA program are all positive opportunities,” he said.

Living close by has helped him to get to know the program as well, an important element to his search.

“I've visited Rutgers a few times on top of supporting them over the years as a local fan and had great conversations with the coaches, especially Dan Donigan,” Shushkovsky explained. “I also met with the team and got a great vibe from them about the soccer program and school. The school offers so much versatility in the classroom and is also very close to home so the ability for my family and friends to come see me play also played a role in my decision.”