Recently committed to play college soccer? Email it to us at commit@topdrawersoccer.com

A former member of the U.S. U17 Men’s National Team, Steven Echevarria likely had a long list of colleges to choose from. 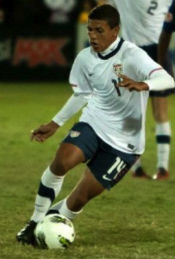 But the self-described possession player eventually saw that Wake Forest was the right fit for him, for a variety of reasons.

“Wake offered everything that I was searching for in a college,” Echevarria told TopDrawerSoccer.com. “I wanted a school that fit my style of play and offered a professional environment similar to what I have experienced with Red Bull from the academy level to the reserve games and first team trainings. In addition, I wanted a school with a reputable academic program that would challenge me in the classroom. Wake exceeds my expectations in both areas.”

The way the team plays on the field was obviously a major factor when it came to the soccer program – not just the slew of pros Jay Vidovich has produced in years past.

“What I like best about Wake’s soccer program is their style of play,” Echevarria said. “They are a team that builds out of their own half and they try to combine to exploit their opposition. That to me is the most effective and attractive way to play the game and I think it is the best fit for how I play. I really look forward to contributing on the field and helping us to build as a team.”

The school itself also seemed like an ideal fit, as it had a lot of the same traits Echevarria was used to in his previous educational settings.

“The main thing that I like about the school is that it is small,” he said. “From middle school to high school, including being in the Residency Program, I have become accustomed to small school environments. This provides for a stronger bond and will make my college transition go more smoothly.”

A goalkeeper who takes pride in his ability on the ball – and likes setting a high line – there was a special sense that Joe Smith got from SIUE and its soccer program.

“I committed to SIUE because I felt I was wanted there instead of feeling like somebody just on the roster,” he told TopDrawerSoccer.com. “I was impressed with the team's family-type atmosphere where they embrace anyone who goes through the program. This made me feel significant rather than a team centered around individuals. The players on the SIUE soccer squad are mature and reflect a good overall picture about their program and the ways things are around there.”

The team’s lofty goals also caught Smith’s attention, as he likes playing in the face of high expectations and pressure.

“The players want to be the best and work hard for it, which raises the intensity in practice,” he said. “The coaching staff knows a lot about the game and also provide both on and off the field support, which makes me feel like they care about their players. It's the vision of the team being close that interested me because they're all in it for themselves but also for the person on their left and right.”

Midfielder Andrew Malinich (Chicago Fire Juniors Louisiana) has committed to NC State for the class of 2014.

Midfielder Derrick Etienne (New York Red Bulls) has committed to Virginia for the class of 2015.

Midfielder Eric Gylling (San Juan SC) has committed to Harvard for the class of 2014.