Boys Commitments: Once and future teammates A midfield maestro who works hard to play smart, but also win the ball back, Christian Segovia aims to help his LA Galaxy U16 side keep possession. 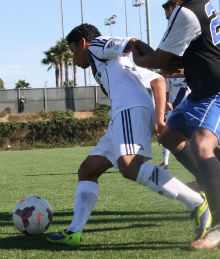 He’ll head north in the fall of 2015 after making his commitment to join California.

“I decided on Cal because I think the coaching is unbelievable and I feel like I fit in very well with the style of play, I’m very excited to work with Kevin Grimes,” Segovia told TopDrawerSoccer.com. “I also chose Cal because I really love the campus especially the new athletic facility. The environment at Berkeley is one of a kind, there is a lot of diversity and it is very peaceful this also really attracted me to Cal and also knowing that my coach Mike Muñoz had a very successful career up there and hearing him talk about Cal excites me.”

Segovia liked the program’s approach to the recruiting process, and took a liking to the similarities between the way LA Galaxy and Cal tries to play. His current academy coach with the Galaxy, Mike Munoz, also played at Cal, another plus for him.

The U16 team captain for the Galaxy, his time playing for the MLS Academy side has been a big help to his game.

“I've become very confident, I’ve improved a lot on my technique and I’ve became a more of a leader and have learned to have a personality and be very vocal on the field and because of this I have the privilege of being the captain of the U16 academy this season,” he said. “It’s a great feeling playing for the Galaxy.”

Joining Segovia up in Berkeley in a year and a half will be his academy teammate Rey Ortiz, who recently committed to play at the Pac-12 school.

Harboring dreams of becoming a professional athlete, Ortiz liked the challenge of both school and soccer he saw in Northern California.

“I decided on Cal because not only do they have a great soccer program but they are a high academic college,” Ortiz told TopDrawerSoccer.com. “I feel like they will challenge me academically and on the pitch as well.”

The high-level soccer team obviously caught Ortiz’s eye, as he looks to make a significant contribution when he gets on campus.

Five players are verbally committed to California for its 2015 recruiting class.

Midfielder Cesar Santos (Chivas USA) committed to Azusa Pacific for the class of 2014.

Midfielder Dante Spinelli (IMG Soccer Academy) committed to Creighton for the class of 2014.