A center back who is comfortable on the ball, Cameron Johnson picked the Philadelphia program for a couple of reasons. 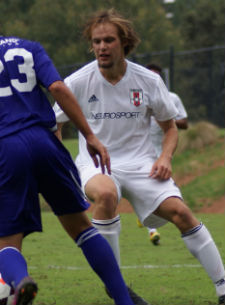 “I decided on Temple due to the reputation for academic and athletic excellence,” he told TopDrawerSoccer.com.

Along with the school and soccer blend, Johnson came away impressed by the program’s coaching staff and is optimistic that they’ll push both him and the program to be at their best.

“[Assistant] coach [Brian] Clarhaut has been very impressive in his representation of Temple and how they view me as a future part of the Owl family,” Johnson said. “Coach [David] Macwilliams has done great things at Temple in his many years as head coach, and I think these guys and their staff can help me improve even more. I believe the next few years will see Temple become a national contender.”

Johnson, who picked Temple over other programs like Old Dominion, Radford and South Carolina, also found himself intrigued by the school’s location.

“I like that Temple is in such a large, historical, and socially diverse city as Philadelphia,” he said. “Growing up near Atlanta has given me an appreciation of people and things from other cultures and backgrounds.”

A hard-working midfielder who played his club soccer near where Stanford head coach Jeremy Gunn used to coach at Charlotte(m), it didn’t take long to convince Justin Kahl to swap coasts.

“Once I stepped foot on campus, I knew Stanford was where I wanted to go,” he told TopDrawerSoccer.com. “Stanford is unique in that it is has an incredible athletics department as well as top-notch academics. Both the soccer and academic side of the equation were very important to me in my decision, and Stanford overwhelmingly filled the void in both categories. I felt Stanford was a place where I could stretch myself both athletically and academically."

The team’s success this season – the Cardinal advanced to the second round of the NCAA tournament after improvement in the Pac-12 – is something Kahl thinks will continue in the future.

“The soccer program is definitely on the rise,” he said. “Coach Gunn is one of the smartest soccer minds I've ever met, and I really believe in what he is trying to do with the program. I also think the style of play is one that will suit me well, for I play at a club now that still embodies many of the same principles Coach Gunn implemented when he was coaching here.”

Goalkeeper Hill Bonin (Real Colorado) committed to University of Chicago for the class of 2014.

Midfielder Jesse Garcia-Aguilar (Portland Timbers Academy) committed to Akron for the class of 2014.

Midfielder Brent Nanchoff (Internationals SC) committed to Akron for the class of 2014.