With the goal of staying on the East Coast so his family could come watch him play, Philadelphia Union defender Auston Trusty recently committed to an ACC power. 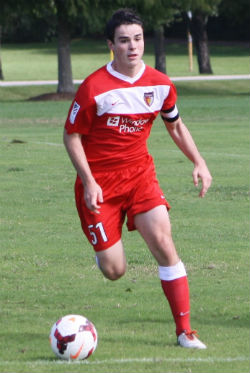 “I decided to commit to the University of North Carolina because of the strength of their academics combined with their nationally ranked soccer program, which made it a great fit for me,” Trusty told TopDrawerSoccer.com. “I was very impressed with UNC's "Top 10" Business School.”

A hard-working player seeking to reach his highest potential, Trusty saw Chapel Hill as the place that would help him develop on the field.

“What I liked the most about the soccer program is that it will challenge me to become the best player I can possibly be,” he said. “I want to contribute to a program that is striving to win a national championship, as that would be an exciting achievement. I really like the coaches and the whole family aspect of the team. I also really wanted to play in the ACC.”

The technical and speedy outside back now knows his next stop, playing college soccer at Duquesne next fall.

“When I went up to Pittsburgh I loved it, it felt like a great city where I could start the next chapter of my life and I felt very settled,” he told TopDrawerSoccer.com. “The school really called to me, I connected well with the coaches, felt I blended well with the team and everything seemed to just click into place when I was there.”

With other programs like George Mason, Elon and San Diego State on his radar, Duquesne eventually felt like the right place for him.

“I really liked how much the program is growing and how great coach Chase Brooks is as a coach, he did some amazing things over at Niagara and is definitely relaying that success over at Duquesne,” Brandon said. “The soccer team plays a great style, they move the ball quickly and everyone seems confident on the ball and really wants to be there, sharing the mutual love for the game. They play with passion and enjoy the game and their football. All of the coaching staff really knows what they are doing out there, very experienced and with the incoming class I see a lot of success for us.”

Outside of the soccer team, Brandon also found a school that was the right fit for him.

“I liked that that class sizes are not too big, perfect size,” he said. “I felt like the vibe of the students really gives you that college campus feeling, and for me that was the biggest thing, coming out of my visit with the right feeling overall. I also liked the location a lot, a very beautiful place to live overlooking the city, and the ideal place to be if you want to play on a great team and get a great education.”

For Andrew Ramsey, he didn’t have to look outside his home state of Texas for DI soccer.

“I chose SMU because I felt really comfortable with the coaches and the players, and I like the direction the program is headed,” Ramsey told TopDrawerSoccer.com. “Their style of play is similar to what I'm used to. The school is beautiful, and I've heard great things about their business school.”

Midfielder Kevin Hwang (Arlington Travel) committed to George Washington for the class of 2015.