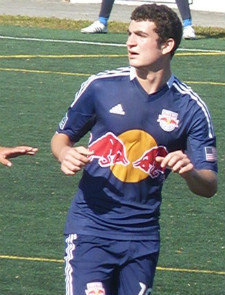 “I decided to pick Michigan State because of the excellent coaching staff and the family atmosphere that they have,” Kovan told TopDrawerSoccer.com. “I've grown up around East Lansing and am very excited to become an official member of the Spartan family.”

Kovan, who starts in goal for his Crew Soccer Academy Wolves side, came away extremely impressed by the school’s soccer program.

“MSU has a very strong reputation in regards to their soccer team, with a run to the elite eight this past year and a Big Ten championship the year before,” he said. “It is a top-notch program with a great coaching staff and a great fan base.”

Few clubs can match the Development Academy accomplishments of the New York Red Bulls over the past couple of seasons, and midfielder Gideon Metrikin will take some of that quality to the Ivy League in a year’s time.

Early on in his visit to Penn, Metrikin realized that this was the place for him to be.

“The moment I stepped onto the campus I knew I wanted to go there,” he told TopDrawerSoccer.com. “The blend of academics and soccer is perfect for me.”

Impressed with the school’s location – Metrikin said he likes the campus feel in an urban environment – last year’s success of the soccer team was another huge factor in his decision-making process.

“I really liked the coaches and the way they run their soccer program,” Metrikin said. “The facilities are phenomenal and I am really excited to play for the most recent Ivy League Champions.”

Heading to Siena College this fall from Curitiba, Brazil, midfielder Marco Kloster’s decision was heavily influenced by visiting the school.

“I chose Siena after my visit to campus,” he told TopDrawerSoccer.com. “I felt a great energy from the players, a good chemistry. I was looking to play for an experienced coach in a small supportive school.”

Kloster was searching through small schools in the Northeast, with interest in Vermont and Providence, but head coach Cesar Markovic helped Siena edge the balance.

The Brazilian also paid tribute to his prep school helping him reach his goal.

“I always wanted to play soccer in College and going to a Prep School as a sophomore was a good choice for me,” Kloster said. “I received a lot of help from my Hebron Academy coach, Kurt Swanbeck who has been like a dad for me. He gave me all the support I needed, shaping me to become a Division I athlete and I am really thankful for everything he has done for me.”

Forward Aidan Murray (New York SC) committed to Amherst for the class of 2014.

Defender Cameron Hardington (Orlando City) committed to Amherst for the class of 2014.

Midfielder Wilson Rios (NJSA 04) committed to NJIT for the class of 2014.

Forward Isidro Prado-Huerta (Seattle Sounders) committed to Oregon State for the class of 2014.