Slowly but surely, the Portland Timbers Academy is building momentum, at least when it comes to sending players off to Division I programs.

Midfielder Reid Baez, an attacking midfielder who looks to create in the middle of the park, opted to commit to the local DI power. 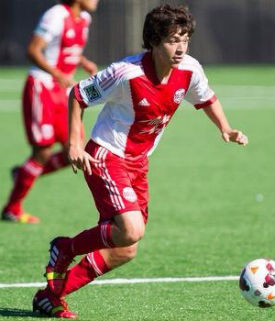 “I decided to commit to Portland because the school has a perfect combination of academic excellence and a quality soccer program,” Baez told TopDrawerSoccer.com. “It is also very important to me that my parents get to watch my games since I'm only an hour away from home.”

Baez found plenty to like about the soccer program, a driving factor for his decision.

“The facilities they have are excellent and their field is beautiful,” he said. “But I'd have to say my favorite thing was how welcoming the team was. I felt as if I was welcomed and would fit in perfectly. They also have a great coaching staff who focus a lot on the style of play I enjoy.”

Going to college at a private school was another reason for his choice.

“It is a very small school but I really enjoyed the campus,” Baez explained. “Everything is reachable with just a short walk. The scenery is unreal there and I'm very excited to be going to Portland.”

Baez is the fourth verbal commitment to Portland’s 2015 recruiting class.

It was some 2013-14 Development Academy campaign for Carolina Rapids midfielder David Lozano.

The Carolina hit man formed a dynamic duo with NC State recruit Tanner Roberts, as the two combined to score 51 goals between the two of them, with Lozano contributing 22 to that tally.

After helping his club side to a 26-6-4 record, he capped off the year by recently committing to UNC Wilmington.

“I felt that UNC Wilmington was the right place for me because I knew I could excel on the field and in the classroom,” Lozano told TopDrawerSoccer.com.

Similarities between his club side and what he saw at UNCW helped influence his decision.

“The coaching staff is very welcoming and it gives the team a family environment, which I was used to at the Carolina Rapids,” he said. “The team is made up of a bunch of great men that look to compete on the field and in the classroom to make sure one another is successful.”

Lozano is the fifth reported verbal commitment to the class of 2015.

Goalkeeper Zack Saltzman (Sockers FC) committed to Boston University for the class of 2015.

Defender Lukas Zinngrebe (Bethesda-Olney) committed to American for the class of 2015.