Andy Perez comes from a good family pedigree and now he is committed to a program that has a pedigree for producing professional players.

“I was attracted to UCSB initially because they have an outstanding soccer program,” Perez told TopDrawerSoccer.com. “My dad [Ismael ‘Easy’ Perez] is a former Olympic and professional player. 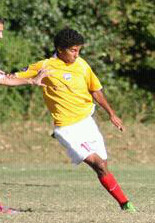 “UCSB produced professional players like [Earthquakes’] Sam Garza and [Toronto FC’s] Luis Silva, and as a Gaucho, I know that I have a shot at following in their footsteps.”

Perez also cited the academics and social scene in Isla Vista as for why he decided on the Gauchos.

While the skillful midfielder is currently with the De Anza Force, he was with the San Jose Earthquakes Academy last season and gave a lot of credit to the staff over there for helping him with the college search.

“[Earthquakes Academy Director] Chris Leitch was instrumental in guiding me in my decision to go with UCSB.”

Perez said he switched clubs due to the commute to ‘Quakes practices interfering with his schoolwork.

He also considered Cal Poly, Denver, and University of Washington before picking the Gauchos.

Move to the Big East and you will start grabbing the attention of some new recruits.

That is the story for the Memphis Tigers. The Conference USA program is headed to the Big East next year and South Carolina United Battery center midfielder Hunter Danna cited the move as one of the reasons he decided to give his verbal commitment to the Tigers last week.

“They are a competitive team and moving to the Big East,” Danna told TopDrawerSoccer.com. “I liked coach [Richie Grant] and the coaching staff. They were very welcoming and I felt like I fit in with the team.”

Danna started 24 games for the Battery U16 team, which advanced to the playoffs, last season. He figures to be a key piece for the U18 side this season in the South Carolina club’s bid for a Finals Week appearance.

Despite his vast Development Academy experience, playing might be hard to come by for Danna in his first season. The Tigers boast a young midfield now with freshman Will Linder and junior Liam Collins locking down spots in the middle of the park.

Danna is still a big coup for a program that continues to improve and will be taking a big leap with its new conference.

It has been a dream summer for Vincent Brunetti.

In August, he pledge his allegiance to an Ivy League program for his college experience.

“Attending an Ivy League school has always been one of my goals,” Brunetti told TopDrawerSoccer.com. “Being able to study at Cornell and play Division I soccer is a dream come true.”

The defender cited head coach Jaro Zawislan and his staff for making his decision easy.

“The coaching staff made me feel comfortable throughout the entire recruiting process,” he said. “I believe they are committed to helping me develop as a student, a person, and a player.”