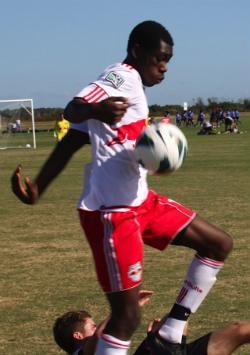 A versatile player who can play just about any spot on the field – outside back, center back, winger or forward – academics strongly influenced his college commitment to an Atlantic 10 program.

“I decided to commit to Fordham because it’s a great academic school,” Odusote told TopDrawerSoccer.com. “Especially their business school. Fordham also gives me a great balance between soccer and school which is very valuable.”

The Rams may not be a national power, but they did produce current Red Bulls goalkeeper Ryan Meara, and Odusote thinks that he’ll progress nicely under the tutelage of the coaching staff.

“Fordham's soccer program has a very bright future and they're playing in a tough conference,” he said. “I know I'm going to develop as a player through coach [Jim] McElderry and coach Gavin [Wyse]. They showed me how much they believed in my abilities through this process.”

The icing on the cake took place during a visit to the school, when Odusote obviously loved what he saw there.

“As soon I stepped into the Rose Hill campus I could see myself being there,” he said. “It's really how I pictured my dream school.”

It didn’t take much to convince Joseph Swenson, a member of New York’s U18 national championship winning side, to make his commitment to a school known for developing MLS talent.

“So much brought me to UConn,” Swenson told TopDrawerSoccer.com. “When I went for my visit I really felt at home with the campus and the coaching staff. The Huskies have a great program and I really can't wait to be a part of it.”

A member of the U16 squad for most of the 2012-13 season, Swenson spent time playing up with the U18s at the tail end of the Academy season, making the trip to Houston for Finals Week and playing 13 minutes in the national championship win over Shattuck St. Mary’s.

He looks forward to improving another year with the Red Bulls in the Development Academy.

“Winning back-to-back national championships was the greatest feeling but was not enough,” he said. “The Red Bulls really push you and although we won a national championship with the U18s it was upsetting that we didn't do it with the U16s, even with the best record in the country. We are going to get back and work hard for one last chance as a group to go for it again and I think that is a huge motivator for us.”

Midfielder Dakota Brinkman (CASL Chelsea) committed to Duke for the class of 2014.

Midfielder Tyler Stowell (Match Fit Academy) committed to VCU for the class of 2014.

Midfielder Amir Bashti (San Jose Earthquakes) committed to Stanford for the class of 2015.

Midfielder Hayden Cochran (Chicago Fire) committed to Central Arkansas for the class of 2014.