An aggressive, hard-working midfielder capable of slotting in multiple positions on the field, Tanner Hummel’s decision to commit to Kentucky came down to a coaching staff’s ambition. 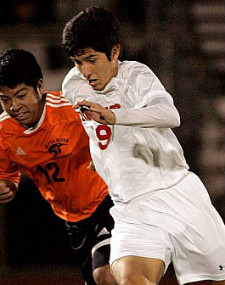 “Coach Johan [Cedergren] is driven to bring the College Cup to Lexington and the Big Blue Nation is headed in the right direction,” Hummel told TopDrawerSoccer.com. “My teammate Kevin Barajas is going next year along with quite a few other academy players from Orlando and Columbus. Coach is putting together a special program and I just want to be a key part of that success. The University, the new $10 million soccer stadium, the city, and all the surroundings are just a perfect match for my college years of playing.”

A similar style of soccer between his club Georgia United and Kentucky was a plus as well, along with a reunion with Barajas, a 2014 recruit who Hummel paired with in the Georgia United midfield.

Hummel also found that there was more than just soccer to make it the right fit for him.

“UK has a great reputation for academics,” he said. “The campus, the other sports, the alumni base and the Lexington community seem like a great fit for my lifestyle and personality. Atlanta is only five hours from Lexington so it will be good for my family to continue to watch me play.”

The midfielder is the first reported commitment for Kentucky’s 2015 recruiting class.

A ball-playing midfielder, Evan Martinez kept it simple when reflecting on his reasons for making a recent commitment to a Big West contender.

“I decided to pick Cal Poly because they're an excellent school athletically and academically,” he told TopDrawerSoccer.com. “My favorite part about the soccer program is the way they posses the ball rather than just kicking it like most college teams.”

For the longest time, local talent in the Saint Louis region have their eyes on making it onto the local power.

Anthony Brown is the latest in the long line of players from the area to commit to play for the Billikins, though he hails from the other side of the Mississippi River in Belleville, Ill., a suburb of Saint Louis.

It was more than just staying local for the hard-working attacker, who was impressed by the environment created and fostered by the program’s coaching staff.

“A major reason why I decided to go to Saint Louis is because I felt comfortable around not only the players but the whole coaching staff,” Brown told TopDrawerSoccer.com. “Head coach Mike McGinty reminds myself of my current coach Jeremy Alumbaugh which also helped my decide because I know both coaches will push me to become the best player I can become. I also decided SLU because it is closer to home, which means that my family will be able to come out and watch me play which is always exciting.”

Brown noted that the program’s history also factored in, as he was eager to join a team with the most NCAA national titles in the country. He thinks that he’ll easily fit right in from a playing perspective.

“I like how they love to get on the attack because I see myself as a very attacking-minded player and I feel like I would fit in great with the team, and their playing style,” he said. “Lastly I liked that the school is basically in the city.”

With his commitment, Brown is the second addition to the class of 2015.

Goalkeeper Phillip Mourikes (Scottsdale Soccer Blackhawks) committed to Manhattan for the class of 2014.

Defender Brendan Hill (Oakwood SC) committed to Connecticut for the class of 2015.

Forward DeJuan Jones (TNT Dynamie) committed to Michigan State for the class of 2015.

Defender Austin Mann (FC Richmond) committed to West Virginia for the class of 2015.

Midfielder Jordan Palmer (FC Wisconsin) committed to Marquette for the class of 2016.

Defender Ryan Watters (Andromeda SC) committed to Cornell for the class of 2015.