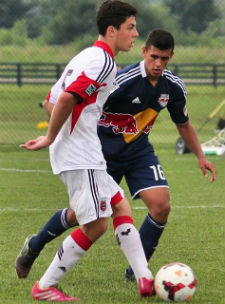 When he saw the Norfolk, Virginia, university up close, everything felt right about it.

“I loved everything from the atmosphere on campus, to the way the coaches carried themselves off the field,” Filerman explained. Old Dominion is just simply somewhere I can see myself going for four years and enjoying myself on and off the field.

An attack-minded wing back for DC United, Filerman is the fifth verbal commitment to ODU for the class of 2015.

Playing a variety of different positions at the club level – Luis Leon has spent time at left back, holding midfielder and was a forward for Pateadores – has helped the young SoCal club standout refine his game over the past few years.

Leon will next have the chance to continue to improve in the Big West next fall, after making his commitment to UC Irvine.

“Multiple factors contributed to my decision to commit to UC Irvine,” Leon told TopDrawerSoccer.com. “In addition to the school’s prestige, the campus is in close vicinity to my house. I will be able to receive a top-tier education while being near my family, which is important to me because having my friends and family watching my games at Anteater Stadium will only provide me with more motivation.”

Leon’s story is even more unique as he’ll become the first person in his family to go to school, a destination that lured him with its academic reputation and the soccer team’s coaching staff.

“I know that playing under Chris Volk, Keith Costigan, and Mike Ditta, who I have known since I began my career at Pateadores, will only improve my game,” he said. “Big things are yet to come at Anteater Stadium and I am excited to be a part of the team’s progress.”

Seven players are committed to UC Irvine for the class of 2015.

Coming down to a tough decision between two Atlantic-10 soccer programs, Tucker Marvin made the choice to join a program that will utilize his offensive abilities at Massachusetts in the Fall of 2015.

The school is relatively close to home, and he liked its academic reputation. A commitment there also means his friends and family will have an opportunity to see him play DI soccer.

“I selected UMass-Amherst because the coaches offered me a great opportunity to fill a need in their soccer program and demonstrated they really cared about the student athlete's academic success in college,” Marvin told TopDrawerSoccer.com. "That, without a doubt won me over.”

Before embarking to the collegiate rank, the attacker is hoping to complete some unfinished business at the high school level first.  His high school team, and perennial powerhouse Shenedehowa, is hoping to avenge two straight years of early playoff losses.

Marvin is the first verbal commitment to the Massachusetts 2015 recruiting class.

Goalkeeper Dylan Biggerstaff (Charlotte Soccer Academy) committed to Cincinnati for the class of 2015.

Defender Bryce Montes (Colorado Rapids) committed to Lipscomb for the class of 2015.