Academic opportunities aside, Taner Dogan noticed a fast improving soccer program that played a decisive role in his college commitment to one of the country’s most prestigious schools. 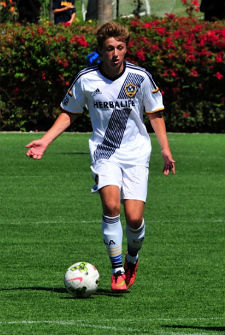 “The soccer program is definitely on the rise under the new direction of Coach Lehrer,” Dogan told TopDrawerSoccer.com. “I also really enjoyed the city of Boston and Harvard is arguably the most prestigious academic institution in the world.”

A technical central midfielder who was considering schools in the Big East, Big Ten and the ACC, the tone set by the soccer team’s coaching staff appealed to him.

“I love the culture and the professional mentality that the coaches and players bring to the program,” Dogan said. “The other quality players that the coaching staff is bringing in will also help take the program to the highest level. In addition, the ability to play in the Ivy League and against excellent out of conference opposition is very appealing.”

Dogan is the program’s first verbal commitment for the class of 2016.

Another LA Galaxy Academy player is on his way to San Francisco.

Former UCLA assistant and Galaxy Academy coach Eddie Soto is currently in his second year in charge of the Dons, a historic program looking to climb back into the national spotlight.

“I decided to commit because the coaching staff impressed me a lot and it felt like the right fit for me,” he told TopDrawerSoccer.com. “I specifically liked that the soccer program has a good history and a lot of potential. It is an up and coming program that has a bright future ahead of it and I would love to be a part of that.”

The attack-minded midfielder also found things away from soccer that he enjoyed about the university.

“What I liked about the school itself is its ideal location and I think the size of the school will help me excel in my academics,” Digiuseppe explained.

Six players are committed to San Francisco for 2015.

Midfielder Adam Haidi (Jackson SC) committed to NJIT for the class of 2015.

Midfielder Jake Eckhardt (Dynamo FC) committed to Ohio Wesleyan for the class of 2015.

Goalkeeper William Pulisic (Richmond Strikers) committed to Duke for the class of 2016.