Another addition to Marquette’s 2014 recruiting class, Brian Fletcher’s interest in the program was at first triggered by the opportunities in the classroom. 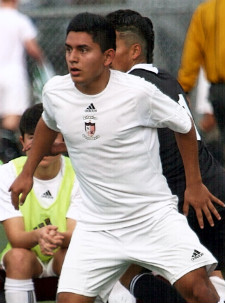 “Initially, I was drawn to Marquette due to its academic reputation,” he told TopDrawerSoccer.com. “Once I was presented with the opportunity to play soccer for Marquette, I knew it was the right fit for me. As a student athlete, Marquette is a dream come true.”

It didn’t take long for him to notice that the soccer team had a lot to offer as well, as it has evolved into Big East power. The conference was another aspect that lured him.

“I like coach [Louis] Bennett’s soccer philosophy,” Fletcher said. “He wants us to maintain possession, control the tempo of the game, and move forward with purpose. It is very similar to the style that my academy team, St. Louis Scott Gallagher, plays. I am also excited about playing in the Big East Conference and competing against some very good players and teams.”

Last but not least, the school’s location offers his family a chance to come see him play.

“I like Marquette’s campus, the size of its student population, and its location,” he said. “I am from St. Louis, Missouri, so I like that Marquette is an easy drive for my parents.”

Fletcher is a part of a four-man recruiting class heading to Marquette this fall.

A goalkeeper who embraces every single nuance of his position – communication, organization and distribution to name a few – Edward Starr was initially interested in Kentucky after spending time at a residential camp there last summer.

Hitting it off with the coaching staff, after making his official visit, his mind was made up, and he made the commitment to the program, eager to help the team move to bigger and better things, something Starr is confident will happen soon.

“Coach [Johan] Cedergren is in the middle of rebuilding the soccer program at Kentucky,” he told TopDrawerSoccer.com. “They made an NCAA tournament appearance his first year coaching in 2012 and ever since he has been bringing in top level talent. They are very young and with all these talented players that are coming into the program I can see a very bright future for U of K soccer. I think this group could be the ones to make soccer history in Kentucky and I want to be a part of it.”

Away from soccer, he also saw how well the university takes care of its athletes, and knew that he would have every opportunity to be successful in school as well as soccer.

“They give you all the resources necessary to be the best student and the best athlete you can be,” he said. “They provide you with all the tools, all you have to do is do the work. I couldn’t imagine any other place for me to pursue my dreams of playing at the next level.”

Starr is part of seven players committed to join Kentucky this fall.

With his commitment to Cal Poly, Christopher Villa jumped at a chance to improve both on and off the field.

“I believe that Cal Poly is the right fit for me because they will not only develop me as an individual but as a soccer player as well,” Villa told TopDrawerSoccer.com. “I am very excited to verbally commit to Cal Poly not only for their academic excellence in engineering, but for their extraordinary soccer program too.”

A decision that he labeled as a “no brainer,” Villa was impressed by a visit to Spanos Stadium and a chat with head coach Paul Holocher. The style of play was another convincing factor.

“The fact that they like to play more of a possession type of game was also very appealing,” Villa said. “Their first touch play and the way the team moves the ball around the field is similar to the way that I’ve been playing for the last seven years at Atletico Santa Rosa with my coach, Messias dos Santos. I don’t like just kicking the ball up the field.”

Martinez is the third commitment for Cal Poly’s 2015 recruiting class.

Forward Cooper Whitfield (Dallas Texans) committed to Kentucky for the class of 2015.

Forward Luka Prpa (Chicago Magic PSG) committed to Marquette for the class of 2016.

Forward Daniel Reeves (DC United) committed to Maryland for the class of 2015.