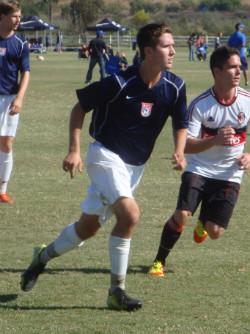 A defender who likes to get forward and contribute in the final third, there was a lot that appealed to Shane Staudle about Boston University – not exactly close to his native California.

“Coach [Scott] Black and coach [Neil] Roberts are two great coaches with a lot of experience,” Staudle told TopDrawerSoccer.com. “I enjoyed the entire atmosphere of the program and the facilities as well as the players and the staff when I visited. I felt that I fit into BU’s style of play and I’m really looking forward to playing there. It is also their first year in the Patriot League, which is a plus.”

Off the field, Staudle believes the school will set him up well for the future with the kind of opportunities he’ll get in the classroom.

“I thought BU was a good fit for me athletically and academically,” he said. “The school is in a great location in the heart of Boston, has a top rated business school which I’ll be attending and it embodies the East Coast experience I’m looking for as a California kid.”

He also considered programs closer to home like UCLA and San Diego, but ultimately felt Boston had the most to offer him.

A midfielder who had plenty of college options to choose from, Butler ultimately separated itself from the pack for Jared Timmer.

“There are many reasons why I chose Butler, one main reason was the academic program they have to offer,” he said. “Their business school is unbelievable and I’m very excited to get there. Also I am very excited to play for coach [Paul] Snape, he is a huge reason I made this choice and I know he will help me develop and improve my game a lot. I am very excited to play alongside Caleb Postlewait, Charlie Constantino and Eli Appleby (other Crew alumni players all be playing at Butler)”

Jared is currently playing his high school soccer for Unity Christian High School and will report back to his club side as soon as his season is over to begin preparations for National League play in North Carolina in November.

Goalkeeper Daniel Hinckley (Black Watch Premier) committed to Kenyon for the class of 2014.

Midfielder Lucas Hodges (Fram Soccer Club) committed to Villanova for the class of 2014.