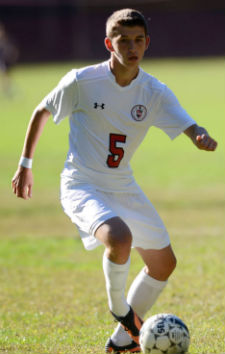 Cooper Whitfield leaves it all on the field for his club team, Dallas Texans. The versatile attacker liked just about everything he saw Kentucky had to offer on and off the soccer field.

“I really felt at home while on campus, and the school pride is like none I have seen,” Whitfield told TopDrawerSoccer.com. “Kentucky is a beautiful state and the campus is no different. UK has top-notch facilities and programs, both academically and athletically. The dedication and professionalism of Coach Cedergren and his staff is excellent. They are committed to the person, in addition to the player.”

Whitfield also took notice of the new stadium that was recently constructed.

“The university is clearly 100 percent supportive of the program with the building of an amazing stadium, locker room and player's lounge this year,” he said. “I believe UK is on the verge of something special and I wanted to be a part of it.”

A technical midfield who is composed and crafty on the ball, Steven Munn was impressed by the academic and athletic focus at Ohio State.

He also took a strong liking to the program run by head coach John Bluem, not to mention his future conference home.

“The Big Ten is a premier conference for college soccer, Ohio State has a strong soccer tradition, and under Coach Bluem they've made the NCAA Tournament eight out of the last 13 years,” Munn told TopDrawerSoccer.com.

Away from soccer, Munn was impressed by the quality of the academics on offer.

“Ohio State is a leading academic and athletic university that offers tremendous opportunity both in the classroom and on the field,” he said.

Like many other college athletic programs, Davidson is on the move, making the jump to the Atlantic 10. It was a move that caught the eye of Virginia Rush defender Jordan Hill, who recently committed to join the program in 2015.

“After visiting Davidson’s campus and talking with some of the students, I knew I wanted to be at Davidson,” he told TopDrawerSoccer.com. “Davidson provides me a perfect combination of strong academics and a chance to compete in a high level Division I soccer program. Davidson also allows me the opportunity to further develop my skills as a student and athlete.”

Classroom opportunities was another big part of his decision, as Hill felt comfortable with the idea of getting a lot of attention from his college professors.

“I like the smaller classroom size of about 10-15 students, and the very broad academic options Davidson has to offer,” he said. “The warm weather also played a major role in my decision, as we can train almost year round.”

Goalkeeper Zachary Watson (Crusaders United) committed to Sacred Heart for the class of 2014.

Forward Camden Buescher (Pacesetter SC) committed to Northwestern for the class of 2015.

Goalkeeper Jake McAteer (PA Classics) committed to Navy for the class of 2015.