During his search for the right college, Tyler Chiu eventually didn’t have to look outside the south for his Division I home, making his commitment to the College of Charleston. 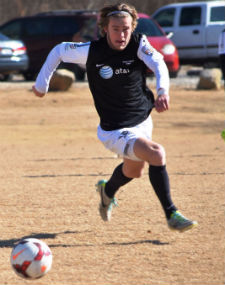 “The school was a perfect fit for what I was looking for,” he said. “They have an outstanding and committed coaching staff, great facilities and a very successful long-standing program.”

A beautiful campus and the academics were big draws as well, while Chiu is hopeful that he can make an impression right away for the Colonial Athlectic Association program.

“I really feel I can make an immediate impact as a player and look forward to a successful college career at the College of Charleston,” he said.

Chiu is the first reported verbal commitment to the College of Charleston’s class of 2015.

A consistent contributor on LA Galaxy’s U16 Development Academy side, Michael Lopez dreamed of playing for a local program one day. It was an ambition recently realized with his commitment to UC Irvine.

“When I was in the tour I felt like this is the right place for me,” Lopez told TopDrawerSoccer.com. “I thought that the facilities and the programs are really great.”

Lopez liked the opportunity to stay close to home in Southern California, and is eager to face the challenge of competing for the Big West program.

“UCI is one of the top Division 1 programs and they have a high expectation in soccer and education and that’s what I am looking for,” he said.

The Galaxy standout is the first reported verbal commitment to UC Irvine for the class of 2015.

Having just lost a senior goalkeeper to the professional ranks this spring, SIUE added a potential starter with the recent commitment of Tucker Schneider, a player who saw plenty of opportunity at the rising program.

“Many factors contributed to my decision to go to SIUE, most importantly was the commitment of the coaching staff to be a top program and their long-term vision for the team,” Schneider told TopDrawerSoccer.com. “Another thing was the goalkeeper coach, coach [Brian] Jones, who I believe to be extremely knowledgeable about the position and is very much like my current goalkeeper coach, Chris Sharpe, in his style, intensity and professionalism.”

There’s a common thread running from Colorado to SIUE as well. Rapids first team goalkeeper John Berner recently wrapped up his career at SIUE last fall before joining Colorado in the draft. Schneider was able to glean some advice about his decision from the rookie.

Four players have verbally committed to SIUE for the class of 2015.

Goalkeer Tyler Beaudoin (DC United) committed to Loyola (MD) for the class of 2015.