A positive, attack-minded player on Albertson SC’s U16 DA squad, Conrad Nowowiejski can play just about anywhere on the field. 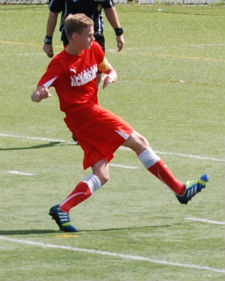 The team captain who loves to win, he didn’t have to look out of his home state for an Ivy League playing opportunity.

“My decision to commit to Cornell was based on a student-athlete level where I was looking for the best of both,” he told TopDrawerSoccer.com. “I’ve always considered Cornell as the most outstanding in academics and wanted to expand my education further. The majors that Cornell offers were what I was looking for.”

Nowowiejski has eight goals in his 18 games this year for Alberston, and was impressed by the program under head coach Jaro Zawislan.

“From a soccer standpoint, Cornell has a great team and a terrific coaching staff, which gives me the uttermost confidence that there are many championships capable of being won,” Nowowiejski said. “It was an important decision to me because it determines the next stages of my life but I was excited to commit and I am looking forward to playing soccer for Cornell.”

A holding midfielder who looks to organize the team in front of him, Ryan Bayne’s educational ambitions helped fuel his decision to commitment to the Big Red.

“Cornell is a great academic institution, especially for engineering which I am interested in,” Bayne told TopDrawerSoccer.com. “Cornell also has a great program under coach Zawislan, Love, and Caldwell. I felt in my gut that I belonged at Cornell; with living only a short drive away and my dad having graduated and played there, I have always been very familiar with the campus.”

Family ties are an obvious draw, but Bayne also took to the soccer team’s recent success, which included an Ivy League title in 2012. Bayne thinks that the team’s momentum is only set to continue.

“The program has been on the rise in the past couple years and looks to have a bright future with great players coming in,” he said. “Hard work is a priority that drives the program and something that I looked for. I'm especially excited to play with the other current commits in my class of 2015.”

Bayne and Nowowiejski are the third and fourth verbal commitments to Cornell for the 2015 recruiting class.

Midfielder Cameron Lindley (Chicago Fire) committed to North Carolina for the class of 2016.

Defender Shea Smalley (Crew Soccer Academy) committed to Denver for the class of 2015.

Midfielder Shane Mecham (Roanoke Star) committed to UNC Wilmington for the class of 2015.

Defender Matt Morgan (Georgia United) committed to UNC Wilmington for the class of 2015.

Defender Enda O'Neill (Colorado Rapids Academy) committed to Wisconsin for the class of 2014.

Midfielder Jeremiah Gutjahr (Indiana Fire Academy) committed to Indiana for the class of 2016.