A two-way central midfielder, Daniel Rutter can play either side of the ball, and is a technical player who plays a significant leadership role for the Dynamo’s U18 Academy squad. 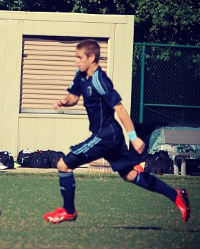 He’ll join the consistent power in Coastal Carolina next fall, a decision fueled by the coaching staff showing faith in the Texas native.

“Coach [Shaun] Docking has a lot of belief in my coming into the squad and making a difference for the program, which is ultimately the reason why I decided to commit to Coastal,” Rutter told TopDrawerSoccer.com. “The amount of quality in the squad as well as the professional environment that Coach Docking and his staff provide made my decision even simpler.”

Along with that level of belief, there were plenty of other facets about the program that drew Rutter’s commitment.

“The style of play, I believe is what caught my eye the most, the team prides itself in being able to play through teams with combination play and great technical ability,” he said. “I looked at several other top twenty programs, but Coastal provides me with all the criteria I was looking for in a place to continue my soccer career.”

He didn’t have any hesitations in swapping Houston for Conway, South Carolina, either.

“The campus provides a small town feel and is full of southern charm, and it definitely doesn't hurt that it is located only minutes from Myrtle Beach,” Rutter said.

A creative option in the middle of the park for Sporting KC’s U18 Academy side, Joey Piatczyc is the kind of player who looks to slip his teammates in behind the opposing defense.

He’ll try and bring that approach to West Virginia, where he recently committed to for next fall.

“I chose West Virginia because it was an environment that is competitive,” he told TopDrawerSoccer.com. “It is also somewhere that felt like home. It seems like the next level for me and the guys were all very welcoming.”

Head coach Marlon LeBlanc is in a bit of a rebuilding year this season, trotting out an extremely young squad. But the way Leblanc has his team playing on the field was another factor in Piatczyc’s decision-making process.

“The coaching staff is outstanding and I really look forward to playing for them,” he said. “It's a very possession based team with the goal to win, which I love. I liked how friendly everyone on campus was and the fact that it's like one huge family.”

Joining Piatczyc in Morgantown in the fall of 2014 is Alec Boerner, a goalkeeper from central Virginia. Like his future teammate, Boerner was impressed with the coaching staff during his search.

“I chose West Virginia for a lot of reasons, but one of the main reasons was because of the consistency they had with me during the whole recruiting process,” he told TopDrawerSoccer.com. “From the end of my sophomore year till when I committed, I was always in touch with them.”

The soccer team was an obvious part of Boerner’s decision, but the school’s reputation had an obvious impact as well.

“They have great tradition, not only in soccer, but also in every sport,” he explained. “They have one of the best programs in the country. Coach Leblanc sets the highest standards in that he wants to win a National Championship, and that's something I definitely want to be a part of.”

Midfielder James Thompkins III (Oakwood SC) committed to Massachusetts-Lowell for the class of 2014.

Defender Brian Kane (Chicago Magic) committed to Georgetown for the class of 2014.

Midfielder Colin Hyatt (Real So Cal) committed to Harvard for the class of 2015.

Midfielder Geoffrey Dee (Shattuck St. Mary’s) committed to Tulsa for the class of 2014.

Defender Blake Homan (Carlsbad SC) committed to Westmont for the class of 2014.