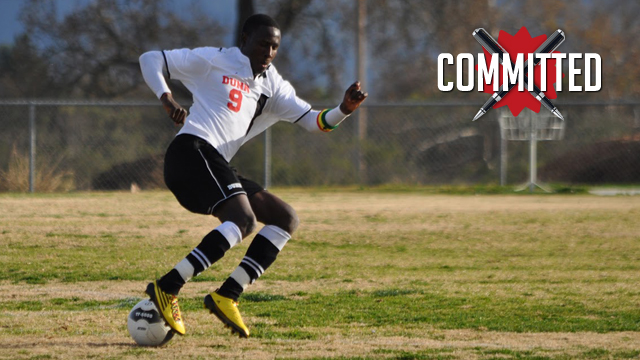 For the 2011-12 season, Abu Danladi’s high school, Dunn Soccer, did not even have a soccer team. It did not have enough players to field a team.

A season later, his team was bounced in the first round of the CIF, California’s governing body for high school athletics, playoffs by a 3-1 score line. 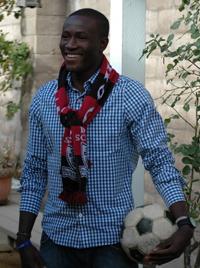 This is not the typical pedigree of a big time recruit, and yet, it would be hard to classify many players in the 2014 class as better collegiate (or professional) prospects than Danladi.

The teenager from Ghana had to travel abroad to jump into the national conversation.

Danladi made his mark last summer when he played with Strikers FC at Milk Cup in Northern Ireland. He scored four goals in 21 minutes against Tottenham Hotspur to lead the Strikers on a rout of the English academy.

It was the type of performance that had many, including a plethora of top collegiate programs, take notice of the promising talent.

On Wednesday, Danladi put the recruiting chase on ice and gave his verbal commitment to UCLA.

"It was a challenging decision," Danladi said. "I was fortunate that some top universities recruited me. In the end, I wanted to create my own path."

While his scoring exploits have been well documented, Danladi has also played center back at the high school level and center midfielder at the club level. He figures to be an immediate contributor to the Bruins roster next fall.

"I would like to thank Debbie Foley, Right to Dream, Santa Barbara Soccer Club, and Dunn School for their continued support," Danladi added.

The Baltimore Bays Chelsea Academy has produced its fair share of top collegiate prospects over the years, and fortunately for local schools, most of the products have stayed close to home.

Connor Smith joins in that chorus of emerging stars from the Bays, as the midfielder gave his verbal commitment to Maryland recently.

“I picked Maryland because I grew up watching the program,” Smith told TopDrawerSoccer.com. “I really liked the coaching staff. They really made me feel like I was really wanted and that this was a good place for me. I fell in love with the campus right when I got there and it felt like the right place for me.”

The Terps beat out Georgetown, North Carolina, and UMBC for the verbal commitment of the Bays U16 star.

Despite Smith’s success in the Development Academy this season (he has nine goals in 17 games), he plans on following his club and high school head coach Steven Nichols to Baltimore Celtic, a newly formed club.

Smith is the first Maryland recruit for the 2015 class.

The UCLA 2014 class, already the top ranked in the country, continues to gain momentum by the day, as players eagerly join the Bruins for what could be a historic freshman class.

Santoyo made his verbal commitment to the Bruins last week.

“UCLA gives me the at home feeling because I’m staying in California,” Santoyo told TopDrawerSoccer.com. “And just from the various national championships they have earned, it gives me the reassurance that I will continue to be pushed playing the sport I love.”

Santoyo also said that seeing the campus really helped him in the recruiting process.

“I realized when I wanted to become a Bruin was when I went for my unofficial visit and talking to [head coach] Jorge [Salcedo] and [assistant coach] Nick [Carlin-Voigt]. We were able to build a great relationship.”

Santoyo has previous experience with the U.S. youth national teams. He has four goals this season in 20 starts for Arsenal U16, which is fourth place in the Southwest Division and heading to the playoffs at the end of this month.

The high school junior also has a 4.2 grade point average.