With playing stops in Florida and Philadelphia already under his belt, U.S. youth national team forward Sebastian Elney can now set his sights on his next stop: College Park, Md. 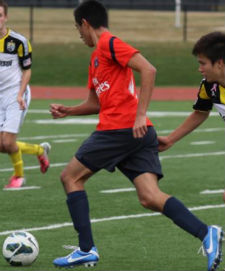 Elney recently committed to join the Terps next fall, a coup for head coach Sasho Cirovski.

“The moment I stepped foot on Maryland's campus I could feel that it was the right environment for me to develop as a student and a soccer player,” Elney told TopDrawerSoccer.com.

Considering Pac-12 and ACC alternatives during his recruiting search, Maryland’s history and how Cirovski treats players on his roster eventually helped him settle on his commitment.

“How the players are treated as professionals and the tradition of Maryland soccer attracted me greatly,” Elney said. “I also really admire coach Sasho's drive to win that he instills on the team.”

A true No. 9 and part of the previous U.S. U17 MNT cycle, Elney can play with his back to goal, both creating and converting chances. He is the latest addition to a very strong 2015 recruiting class that includes Andrew Samuels, Connor Smith, Duckedeben Jules, Jorge Calix, Adolfo Ovalle, Amar Sejdic and Daniel Reeves.

Off to a strong start to the 2014-15 Development Academy campaign, with five goals in seven games, Ruben Sanchez is a hard-working and determined midfielder looking to help his team win.

Next fall, that team will be Marquette, after Sanchez verballed to join the program in 2015.

“I decide to commit to Marquette University because it was a very nice school and it was located next to the city of Milwaukee,” he told TopDrawerSoccer.com. “Marquette has a very good business school and I'm thinking about going into something in business.”

The team’s style of play was a strong influence over his decision.

“They like to pass the ball around and don't go long a lot,” he said. “They go long when it's appropriate to go long. This is the style that I love to play because I'm more of a passing player that likes to break teams down in the middle of the field.”

Proximity to Milwaukee and a busy city also caught his eye during his search.

“The thing I like the most about the school is that it's close to the city and the campus is really nice,” Sanchez said. “Every time I visited Marquette I always learned something new about the school and it fascinated me.”

The midfielder is the fourth verbal commitment to Marquette for 2015.

Goalkeeper Andre Glasnovic (NK Zagreb) committed to San Francisco for the class of 2015.

Forward Emmanuel Twumasi (Kent School) committed to Wake Forest for the class of 2016.