Ken Krolicki’s journey to college soccer has been pretty unique.

The Crew Soccer Academy Wolves midfielder did not really have a grasp of college sports for much of his upbringing. 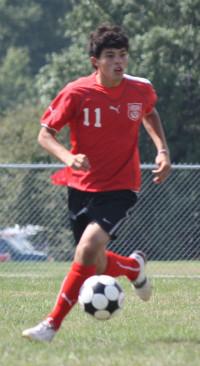 “I moved back to the United States for high school from Japan so I didn’t really grow up following college sports that closely,” Krolicki told TopDrawerSoccer.com. “I had a lot of catching up to do.”

With a number of schools chasing after his verbal commitment, the period of learning about schools came fast and furious.

“The process of getting to see colleges and meet coaches was great,” he said. “I felt that I learned something from everyone I met. I got to see campuses that I never thought I would be considering.”

Krolicki said that he considered Michigan, Oakland, Colgate, Cornell, Penn, and Georgetown before he committed to Michigan State.

“They are all great programs and all of the coaches were generous with their time in meeting with me. I really want to thank everyone who took time to talk to me.”

It was the coaches and the welcoming nature of Michigan State that made the Spartans stand out from the crowd.

“I just felt at home,” he said. “The coaches are great and they have ambitious plans for the program. I felt that I could train hard and keep the right balance in academics. I’m proud to be a Spartan and want to work hard to contribute.”

Committing to MIT is much different than pretty much every other college program out there. With the institution’s academic standards, players have no guarantee of getting into school even if recruited by the school’s soccer coach.

Tommy Harris rolled the dice in that fashion, and it paid off, as he was recently accepted to play soccer there.

“The quality of education was the most important factor in deciding on a college,” he told TopDrawerSoccer.com. “I decided to commit to MIT because I've loved math since I was a little kid, and I want to pursue a career in engineering after college.

The Division 3 nature of the program was another strong factor aside from the school’s obvious reputation. Harris liked the flexibility that level offers, while also providing a chance to compete at a decent level.

“I feel MIT's soccer program is definitely on the rise,” he said. “Head Coach Mike Singleton is a great coach in his third year and helping to turn MIT into a dominant force. MIT made the NCAA tournament after winning the NEWMAC conference tournament this past season, and I believe this year's recruiting class will help push MIT even deeper into the tournament in the coming years.”

It wasn’t easy for Harris to get noticed either – he doesn’t compete in the Academy, living two and a half hours away from both Chicago and St. Louis, and in order to get noticed created a highlight clip, which worked out for him.

A tricky midfielder from Wisconsin, Colin jumped at his chance to make an early commitment to nearby Wisconsin-Milwaukee.

"I made this commitment because I felt it was the right place for me,” Colin told TopDrawerSoccer.com. I developed a great relationship with the coaches, and knowing that my parents and friends will still have the chance to come see my play made it a place to be at with a great soccer environment."

Goalkeeper Ryan Vyskocil (Parsippany SC) committed to Siena College for the class of 2013.

Goalkeeper Braeden Luna (Orlando City SC) committed to Kentucky for the class of 2014.

Forward William Gauger (CASL Chelsea) committed to Wake Forest for the class of 2014.

Midfielder Jared Rice (Dallas Texans) committed to SMU for the class of 2014.

Goalkeeper Matthew Sanchez (Baltimore Bays) committed to Old Dominion for the class of 2013.