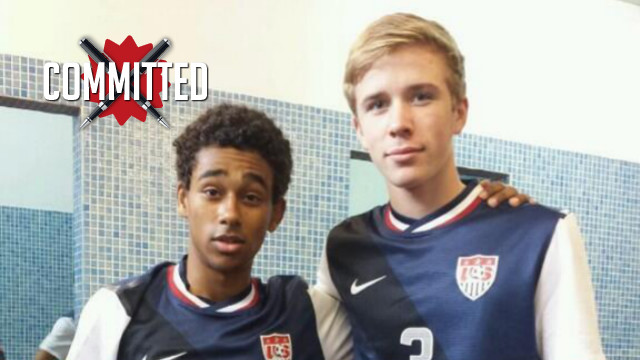 The UCLA Bruins have added another youth national team player to the growing list of top recruits heading to Westwood in the coming years. Yueill, a key piece for the U18 Men’s National Team, gave his verbal commitment to the Pac-12 powerhouse on Monday.

“There were many factors that made me pick where I did,” Yueill told TopDrawerSoccer.com. “When I went on my unofficial visit, I knew that UCLA was a place where I wanted to be. The coaching staff and players that I met and got to know while I was there were amazing. I know that I will have a wonderful four years being a Bruin.”

Yueill plays as a No. 8 with his academy side and expects to transition into that role with the Bruins, who will be looking for midfield help in 2015 after the graduation of All-American Leo Stolz.

The teenager from the Land of 10,000 Lakes revealed that a number of top soccer programs were trying to recruit him before he made his verbal commitment.

“I was extremely fortunate with the schools that were interested in me such as North Carolina(m), Indiana, Creighton, and Wake Forest,” Yueill said. “All would have been great schools and programs to be a part of.”

The commitment to UCLA highlights an extraordinary past few months for the midfielder who has seen his stock rapidly rise with the U18 MNT.

“I have been very fortunate with the opportunities that have been presented to me these past few months,” Yueill said. “Playing for the U.S. national team is a great honor. I have had very few international experiences, but have still gotten to play against some of the best teams in the world, such as Spain and Argentina. These experiences were very eye opening to me and were amazing to play in.”

Yueill will be part of the U.S. U18 MNT camp in Carson, Calif. this month and has games scheduled against Canada and Mexico.

Once he stepped on campus, Jack Sicker knew that Wofford was the right place for him.

“After my first visit, I knew I wanted to be a Terrier,” he told TopDrawerSoccer.com. “The players and students that I have met are committed on and off the field and are all quality individuals. Coach Polson and Coach Tyson are professional and knowledgeable in their coaching abilities and above all else they are genuinely good guys. The soccer program and academics of Wofford are top-notch and will help me with life after college.”

A versatile and athletic player who has plenty of pace, he liked the tight-knit feeling around the team.

“The chemistry of the players and coaches on and off the field really stood out to me,” Sicker said. “I look forward to contributing to Wofford’s soccer program as it continues to succeed.”

An outside forward that enjoys the challenge of taking on defenders one-on-one, Alejandro Segovia found everything he was looking for in a soccer program without looking outside the state of Oregon.

“I decided to commit to Oregon State because it felt like the right fit, from being in a tough conference like the Pac-12 to the support that the students receive academically,” Segovia told TopDrawerSoccer.com. “I just felt like that was a great place for me to grow as a player and person as well as to stay close enough to home to where I can visit my parents.”

The team’s emphasis on player development caught his eye.

“I really like how the program is devoted to being the best it can be when it comes to playing and helping the players reach their full potential,” he said. “They showed that they cared not just about my soccer abilities but also about me, as a person. You don't get that in a lot of programs nowadays. I was really excited to see how great their facilities were as well.”

Defender James Reiner (FC Copa) committed to Princeton for the class of 2014.

Defender Willie Maddox (Vardar) committed to Oakland for the class of 2015.

Forward Shawn Williams (Jacksonville FC) committed to Chowan for the class of 2014.

Midfielder Alexander Chopra (Orlando City) committed to Rollins for the class of 2014.

Midfielder Jarett Busacca (IMG Soccer Academy) committed to Rollins for the class of 2014.

Defender Jonathan Smith (Jacksonville FC) committed to Florida International for the class of 2014.

Defender Jordan Hill (Virginia Rush) committed to Davidson for the class of 2015.