This week’s edition of the boys commitments update provides news from almost all corners of the map: a Texan looks to follow in the footsteps of Clint Dempsey, a Southern California YNT defender sticks with Navy, the Huskies sell the soccer in Seattle, Oregon State’s charm impresses an MLS prospect, and the Purple Aces receive a verbal commit from Kentucky.

Trevor Haberkorn, a regular with the U.S. U18 Men’s National Team, is following the path of a famous Texan with his college commitment.

“There have been many great players that succeeded both on and off the field under coach [Doug] Allison such as Clint Dempsey and Ricardo Clark,” Haberkorn told TopDrawerSoccer.com about joining Furman. “I am looking forward to follow in their footsteps.” 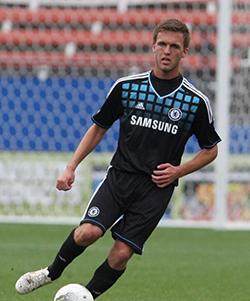 Those are big shoes to fill considering the success of the pair after they left Greenville, but the gifted center back has similar dreams for his post-college career.

“I strongly feel playing for [coach Allison] will lead me to fulfilling my professional soccer dreams as well as attaining the educational background to succeed after soccer,” Haberkorn said. “My family and I strongly believe that this is the school that fits my goals and it will be a great four years playing for the Paladins and taking them to the top.”

Off the field, the education at Furman and the location of the campus also left a lasting impression on the top ranked recruit.

“I chose Furman University as I feel strongly that I'd be receiving a very prestigious education while also playing for one of the top soccer programs in the country that is focused on getting back to national recognition,” Haberkorn said. “The school is located in a beautiful area and I fell in love with the atmosphere throughout the campus and city.”

Haberkorn is the first verbal commit of the 2013 class for Furman.

Derek Vogel has already made history for the U.S. Naval Academy, and he has not even played a game there.

With the call-up, there has been an increase of attention from schools, but Vogel says he is sticking with the commitment he made to Navy in June.

“At the time, that was the best choice, and still is,” Vogel told TopDrawerSoccer.com. “Tons of other schools have been contacting me since [the U20 MNT camp], but I decided to stick to my word and Coach Brandt at USNA.”

It was the trip onto campus last year that sealed the deal for Vogel to join the Midshipmen.

“My attention was immediately caught when I went there as a junior last year and the seniors on the soccer team bent over backwards for me, and gave me an incredible amount of their undivided attention,” Vogel said. “I have been on officials to a few other schools and no one came even close to what I felt at USNA.

“Plus, the Naval Academy is just too big of an opportunity to pass up.”

For Steven Wright, it was all three.

The technical midfielder from Northern California was sold on wearing the purple and gold after he made an unofficial visit to Seattle.

“After I made my unofficial visit to UW I knew that I wanted to be a Husky,” Wright said. “I felt that every aspect of the facilities, coaching staff, academics, and team would give me the best opportunity to grow as a person and a player.”

Playing in the city with a rampant support of the sport also played a part in the clincher for Wright.

“Growing up in a household with the opportunity to experience the soccer culture around the world, being in a soccer environment (like that of Seattle) was a huge plus,” Wright added. “I have had the opportunity to play in the Gothia Cup in Sweden, as well as spending a month training at Cruzeiro Esporte Clube, which showed me the difference it makes as a player to know you have fans behind you and your team.

“Another aspect that drew me to a soccer city, was the experience my brother Chris had at the University of New Mexico. UNM ranks among the top in average attendance, and being apart of that environment created a strong desire within me to attend a school with support from fans.”

Wright said that there were four other schools in the mix before he made his final decision: University of New Mexico, Georgetown, Stanford and University of Notre Dame.

Michael Steele and his family live about two hours north of Seattle. For the last six years, Steele has made the trek into the Emerald City for club soccer.

That perseverance and commitment to training paid off last week when the hard working center midfielder gave his verbal commitment to Oregon State.

Steele told TopDrawerSoccer.com that the beauty of the campus really sold him on Corvallis, as his home for four years. Also, the coaching staff’s attention to the Northwest recruit was a big plus.

“The coaching staff knew my style, which impressed me,” Steele said. “They play the style that I like too.”

Steele was an integral part of the Sounders team last season that advanced to Finals Week. This year, he is one of the top scorers on the U16 team, which is top of the division.

The midfielder said that San Diego State and New Mexico were also in the mix before he made his commitment.

He is the first verbal commit of the 2013 class for Oregon State.

Just because Kentucky isn’t represented in the Development Academy, doesn’t mean the state is lacking in talent.

Landon Souder, a recent commit to the University of Evansville, is an example of that. A three-year starter for Lexington FC, the defensive midfielder can cover ground in the middle of the park with ease.

He’s eager to improve both on and off the field as he makes the transition to school next year.

“The main thing I look forward to about playing at the next level is the improvement in every aspect I hope to experience, skill wise, physically, mentally, as well as performing in the classroom,” Souder told TopDrawerSoccer.com.

There were several reasons why he ended up choosing Evansville, including the relationship with the coaching staff and the school offering his major of preference – physical therapy.