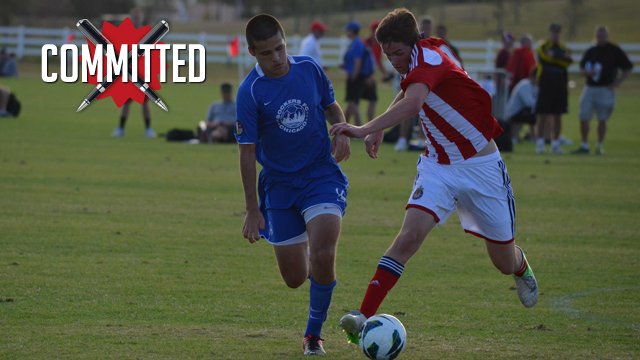 Goal scorers can be tough to find, which is why colleges tend to line up for the best ones. That has been the case for these IMG Academy Top 150 strikers that made their verbal commitments last week and helped improve the 2014 classes for two programs.

The pipeline from Chivas USA to UCSB is alive and well. 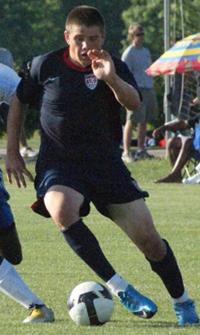 Caleb Calvert is the latest to join the stream of players that are headed up the coast to sign up with the Gauchos. Earlier this month, dynamic midfielder Axel Mendez gave his verbal commitment to Tim Vom Steeg and his staff. Last week, Calvert and U.S. U17 Men’s National Team member Adonis Amaya joined Mendez in selecting UCSB.

“I decided UCSB was the perfect place for me because they have an excellent soccer program and academically speaking, they have everything I'm looking for,” Calvert told TopDrawerSoccer.com. “What ultimately drew me to them was the opportunity to play soccer at a very high level and get the education I'm looking for.”

The tall striker, whose game resembles U.S. U18 Men’s National Team forward Ben Spencer, fills a big void for the Gauchos. After injuries took Achille Campion out of the lineup in 2012, UCSB’s lack of depth at the forward position was exposed. Spencer’s arrival this fall was supposed to fix that issue, but the Albuquerque-native is now queuing up his move to the professional ranks instead of college.

Calvert will step into the role in 2014 when he arrives along with Mendez and Amaya in what is shaping up to be another very strong class for the Gauchos – assuming all three stay away from the professional game.

Amaya’s absence has hardly been a problem, as Calvert has nine goals in those 13 games, which has already surpassed his total of 8 goals in 15 games from last season.

The 6-2 forward from Serrano High School has emerged as one of the most consistent scoring threats in the Southwest Division in the Development Academy. However, it is rare to hear his name uttered on the field.

Instead, Calvert is pretty much exclusively called ‘Rooney.’ A nickname he picked up over six years ago from a club coach.

“I picked up the nickname 'Rooney' when I was 8 years old,” he said. “It first started when my old coach, Darren Goodman, went to England and brought me back a Rooney jersey. I officially developed the nickname from my former coach Barry Ritson. I showed up to tryouts wearing my Rooney jersey and all Manchester United gear. Ever since that day I have been known as Rooney!”

UCSB fans can expect the arrival of their very own ‘Rooney’ in 2014.

However, college coaches easily saw the talent in the forward from Pennsylvania.

The striker with surprising nimble feet and a lethal shot is one of the most efficient players in the Development Academy. With 23 goals in the last two seasons to back it up, there was plenty of interest in his services at the collegiate level.

The Lower Dauphin High School standout quieted the chase last week when he gave his verbal comment to the Cougars of SIUE.

“My dad is from St. Louis and SIUE being 15 minutes from my grandparents helps,” Julius said. “Going nine hours away from home is tough enough so the family aspect definitely played a role.”

The proximity to familiarity helped lure Julius, but it was the program’s historical success that landed the fish for the Cougars coaching staff.

“My ultimate reason would be that I was drawn towards what SIUE was. The school has an illustrious history as a program and I believe they are right on the verge of getting back to where they were. Their style of play is identical to my club at PA Classics. I believe I fit right into the culture that is at SIUE. The campus is also immaculate. It was my favorite place, it was a place I could see myself being even without soccer.”

SIUE was one of the last teams to miss out on the tournament last season after compiling a 13-7 record with some tough games against Creighton and Indiana. The Cougars lost a handful of seniors from that squad, but look to be building a solid core for the future with Julius and others headed that way.

Forward Alex Halis (Sigma FC) committed to Syracuse for the class of 2013, and has enrolled starting this spring.

Forward Cyle Larin (Sigma FC) committed to Connecticut for the class of 2013.

Forward Kaba Alkebulan (Sacramento United) committed to Cal Poly for the class of 2013.