There are two things that hold true in April: Red Sox fans panic and verbal college commitments start rolling in.

Even with Ben Spencer, Drew Murphy, and Josh McNeely already on board with the Gauchos for 2013, Tim Vom Steeg and his staff are not slowing down with recruiting.

Last week, the Gauchos added a prized center back in John Rehl Jr. to the class of 2013 recruits. 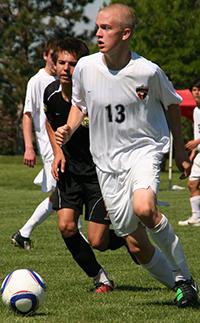 “Obviously the consistently strong soccer program attracted me to UCSB initially,” Rehl told TopDrawerSoccer.com. “My dad and I had toured a few California schools the summer after freshman year, and UCSB really stood out to me.”

The Colorado kid cited the academics and campus for what really sold him on the Gauchos.

“I love the beach,” he added. “After attending two college ID sessions at UCSB, it was obvious there was a great fit for both sides.”

And joining that talented class heading to UCSB was the cherry on top.

“When we visited Coach Vom Steeg, he talked about the incredible talent they were bringing in for the class of 2013 and how they aimed to use that class to build a team to make a run at a national championship,” Rehl said. “I'm honored to be amongst such a talented recruiting class. As a highly competitive player who wants to be part of a winning squad, it would be difficult to walk away from that.”

The defender, who is the captain of his U.S. Soccer Federation Development Academy squad, said he had interest from programs across the country, but it was really UCSB where he wanted to be.

“UCSB was my top "A-list" school, so as soon as they extended an offer and we were comfortable with the coaches, school, and program, the decision was done.”

That is exactly what sold PDA’s Billy McConnell on joining the Hoosiers.

“What really drew me to Indiana was the number of pros they have produced and their school spirit,” the defender, ranked #46 nationally told TopDrawerSoccer.com. “Everything felt right for me. Also, the coaching staff knows what they are doing and I can learn a lot from them.”

McConnell is a Region I ODP standout, and has spent the last four Development Academy games playing up an age group with the PDA’s U18 squad.

“There were plenty of other schools I was looking at, and had my interest before Indiana, but overall, Indiana had the best program for me.”

The 17-year-old joins Tanner Thompson, Tommy Thompson, and Colin Webb as the early verbal commits for the Hoosiers 2013 class.

Home is where the heart is. For Jonathan ‘Boo’ Davis, his heart is in Raleigh. 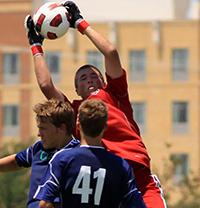 “It was really a decision of the heart,” Davis told TopDrawerSoccer.com. “Someone once told me you have to trust your heart, and my heart was telling me NC State.”

The talented goalkeeper for North Meck mentioned the similar values of the coaching staff making him feel right at home with the Wolfpack.

“But what drew me most would have to be that all the coaches are Christian guys, which is something that is very important to me,” Davis said. “I was very impressed with the direction the coaches are taking the NCSU soccer program, and the steps they are taking to having a quality program.”

The former U15 Boys National Team keeper also mentioned the new facilities at NC State and the athletic department's commitment to the soccer team as playing part in his decision.

Davis carries a 4.4 GPA through his junior year and had a few other schools vying for his verbal commitment.

“University of Virginia, Appalachian State, Georgia Southern, and Wofford were the other schools in the mix.”

Davis joins Travis Wannemuehler and Michael Bajza as the 2013 commits thus far for NC State. He said that he has not met either of the other recruits, but is looking forward to 'training and playing together' in the future.

Dartmouth just added a new goalkeeper coach to the staff in Alan Main. And in 2013, the Big Green will add a top recruit to mind the nets.

“With the new addition of ex-Glasgow Rangers goalkeeper coach Alan Main, I hope to continue developing as a goalkeeper during college,” James Hickok told TopDrawerSoccer.com. “Coach (Jeff) Cook has gathered an elite coaching staff at Dartmouth that really made me feel at home during my visit.”

“What drew me to the Big Green was the incredible balance of receiving a top undergraduate education while also having the chance to play for a team that is regularly in the NCAA tournament (five consecutive years),” the keeper added. “Finally, every single alumni that I talked to before I made my decision had the same reaction about how much they loved their four years there.”

Hickok revealed that he also had interest for a handful of other impressive programs.

“Yes, towards the end Notre Dame, Georgetown, Columbia, Harvard, Brown, and Yale were all in the mix.”

Hickok is the first verbal commit for the Big Green’s 2013 class.