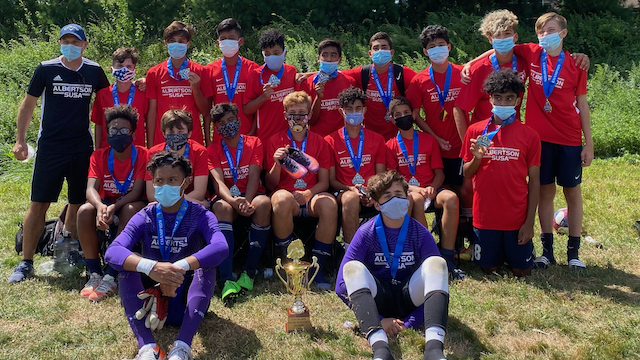 The Boys ECNL season kicked off last weekend in Texas. More clubs will join the competition this weekend as other conferences get in the mix.

The schedule for the Southwest Conference is still to be determined as many of the clubs in that region wait on the go-ahead to return to competition. One club that will be eager to face new challengers this season is RSL-AZ. The Tempe club has especially impressive in the younger age groups as RSL-AZ has developed a number of players that went on to play for the MLS Youth Academy in Utah.

Albertson SUSA looked impressive during the East Meadow Soccer Tournament during the last weekend of August as one of the final preseason events. Albertson won the championship at the tournament and scored 10 goals in four games. The efficient outfit should help carry Albertson through the opening stages of the season.

SLSG has some strong returning talent on the roster for the 2020/2021 Boys ECNL season. The Illinois club will be looking at Dane Compton and Colin McGinnis to lead the charge into the season.

FC Dallas made quite the statement with their first game of the season against Oklahoma Energy with a lopsided victory. Edward Garcia, Duncan Sullivan, and Emanuel Radilla were impressive in the victory for FC Dallas.

Rise SC brought over a roster full of players with Development Academy experience, which should help them traverse the opening stages of the season. Henry Hawthorn looks like one to watch among the defense for Rise.

Loudoun Soccer might be the team to watch in the Mid-Atlantic for this season. The Virginia club kicks off the campaign against Richmond United on the 12th of September. Forward Birhanu McAvoy has been one of the top performers for the team in the past.

Tennessee SC looks like a team to watch this season. The group has been dominant during the preseason. Forward Davin Gleaves has been on fire in front of the goal with a number of tallies during the preseason. Gleaves has previous experience with the U.S. Soccer Training Centers, which should make him a marked man when the season kicks off for TSC against Atlanta Fire this weekend. Riley Clothier, Evan Waggoner, Dylan Keiner, and Will Kassebaum have also been standouts for TSC in the preseason.

Dallas Texans imported their Development Academy teams into the ECNL for this season - and have two squads for every age group. The U17 squad will be looking at Jorge Morgado and Chase Turcotte to lead the way in the competitive Texas Conference.