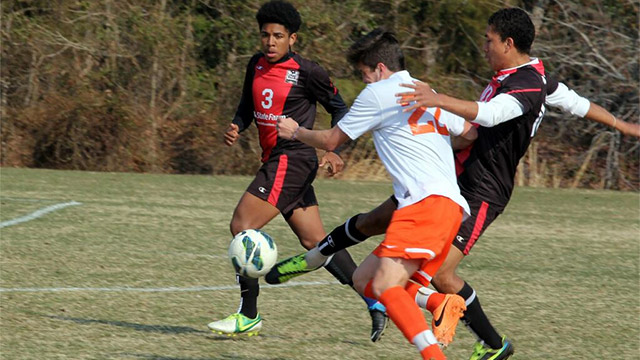 RICHMOND, Va. — The boys action at the Jefferson Cup wrapped up on Sunday. Here's how two of the games finished.

Day 3 of the Jefferson Cup is the last chance for a number of young players to showcase their talents in front of a large group of college coaches and parents on a beautiful sunny day in Richmond VA.

The Lightning and COPA Academy laid it all out on the line in a very physical and fast paced game. The excitement came early as Lower Merion created chances by swinging in quick crosses in behind the COPA defense. An early header just wide of goal by Abraham Kamara nearly put the Lightning on top. FC COPA were able to find a great deal of success from their wingers as Abby Elsayed and Michael Prosuk used their size and skill to get end line. Although there were many great crosses nothing seemed to cause difficulty for either goalkeeper.

With tired legs and third day fatigue setting in the game seemed to open up for both sides. Lower Merion’s Jordan Wix Rauch took full advantage of the tired back line as he dribbled from midfield taking on three defenders before finding the back of the net. Wix Rauch’s lone goal was the difference as the Lighting earned 4 point on the weekend.

Sundays featured game saw two of the top teams nationally square off in what would be a great finale for the U-17 Championship Division for the 2014 Jefferson Cup.

Saturdays top player Eryk Williamson displayed once again why he is one of the top players in the area. Upper Freehold was tested early as a Williamson’s shot bounced off the post just three minutes into the game. The composed forward would take full advantage of his second opportunity as his volley sailed towards the left corner to give Arlington a 1-0 first half lead.

As the second half got underway the urgency from the New Jersey side kicked in and they found themself on the attack. A John Fuquene foul just outside the box would give Upper Freehold their best chance of the day. The curled free kick over the top of the defense landed perfectly onto the head of midfielder Derick Carpio who was able to tie up the game at 1 a piece. The goal ignited Freehold and the Virginia state champs found themselves playing more defensive than they would have liked.

In the closing minutes of the second half an unexpected rocket from 25 yards out gave the Arlington Strikers a one-goal lead.  A third goal would get added in the last minute to give Arlington a 3-1 victory. Both sides can hold their heads high as they displayed some great soccer and effort. Arlington leaves the Jefferson Cup with a unbeaten record and a lot of momentum carrying them into Region 1 play.