In this week’s recruiting insider, three standouts of the Midwest give updates on the recruiting process, plus a striker from Florida discusses his suitors. 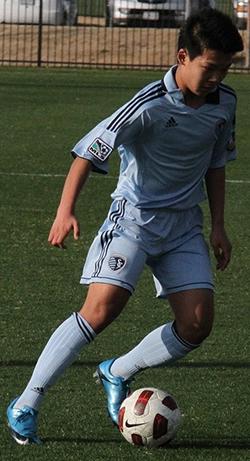 “I'm starting to get a better idea of where I want to go, but I still have a lot to think about since I'm planning on a lot of different visits in the upcoming months,” he told TopDrawerSoccer.com. “I plan on really narrowing down my options this summer after the showcase.”

Kim has already hit the road to visit Saint Louis and Tulsa where he said he enjoyed his time, but there’s a long list of schools he’s hoping to see, including the likes of Harvard, Loyola and SMU to name a few.

When it comes to making his choice, the degree is the highest priority, although he’s hoping to continue to progress as a player.

“The biggest factor is education just because I want something to fall back on if I was to go through a career-ending injury in the future,” he said. “I want to be able to do big things even after my soccer career. At the same time, I want a school that can continue to push my limits as a soccer player and get me to the next level. I want to compete and play on a team that can produce professional players.”

If he eventually gets his way, he’ll end up attending school on either side of the United States.

“My ideal situation would be for me to go out to any of the coastal areas,” he said. “I'd like to live in areas other than the Midwest and get out there into the world; that's what college is all about. That's why Stanford is such a big interest of mine, it'd be a dream to live in California and do what I love.”

Another player at the early stage of the college search is Florida’s Ethan Spivack.

“I’m not that deep into it but I have a couple schools that I’ve been talking to for awhile,” he told TopDrawerSoccer.com.

Spivack is keeping an open mind as to where he’d like to play – while he’s hoping to land at a Division I program, he’s not ruling out a few Division III schools including Amherst and Haverford.

His search is dictated by the two-fold desire to play at a high level, but he also wants to be able to compete for playing time as well as get a good education.

“I want to go to a school that’s good academically as well as soccer, but I want to go to the best school I can that I can get playing time and can also compete at the highest level I can,” he said.

South Florida is one of the schools on his list, and while not straying too far from his native Florida wouldn’t be bad, the Northeast also has appeal of being close to family.

“I wouldn’t mind staying near Florida, but most of my family mostly lives in New York, Connecticut, Massachusetts, that whole area, so if I can go to school around there it would be nice.”

Nick Tobias wants to make his commitment by the end of this college season, but he’s still in the middle of trying to get in touch with coaches.

“I am currently emailing college coaches and just trying to get my name out there,” he wrote TopDrawerSoccer.com.

A stalwart for St. Louis Scott Gallagher Metro, Tobias has caught the eye of a few programs, including Xavier, NC State and San Diego State.

And while he hasn’t made any visits yet, he continues to keep his options open and knows what he’s looking for.

“The college that I go to has to have good academics,” he said. “My dad tells me that I have to like the school even if I didn't play soccer there.”

Jason Pesek, a standout defender in the Development Academy, is taking his time with the recruiting process.

“Finding the ‘right fit’ is key,” Pesek told TopDrawerSoccer.com. “While I’ve focused my efforts both in the Midwest and the East Coast, I’ve been willing to take my time, ask a lot of questions, and find a school that will challenge me academically, athletically and socially”

The left-footed 17-year-old, who also plays in the midfield, has attended various camps across the country during his search for a college.

“I’ve attended camps at some of the ACC and Ivy League schools, and am very impressed with their academic curriculum as well as their solid soccer programs,” he said. “Schools I’ve continued to communicate with have been with the Big Ten, Big East, ACC & Ivy League, primarily."

While the ultimate destination may be some time off, Pesek has a firm understanding of what he wants.

“My ‘dream’ school, while not particular right now, would have a solid (and committed) coaching staff and program, a renowned academic reputation and a place where I can grow and develop as a player and a person.”

Want to be featured in our Recruiting Insider? Send us an e-mail at recruiting@topdrawersoccer.com and let us know.