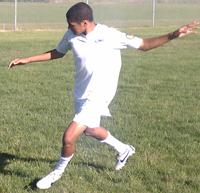 An athletic and versatile outside back, Amon Frazier has been putting in the effort to try and find the right fit – even though he’s only wrapping up his sophomore year this spring.

“I am currently talking to multiple coaches from different universities and researching which college will be the best fit for me,” Frazier wrote TopDrawerSoccer.com in an email. “I have put together 2 soccer highlight videos which has been a huge help in getting me noticed by college coaches.”

Part of the recruiting process has taken Frazier to a camp out at San Diego State, a trip up to Portland’s campus, and a stop by the Air Force Academy where his older brother Alex plays for the men’s soccer team.

Frazier lists location, academics, majors and the number of pros who have come out of the programs as some of his most important factors. He’s also interested in heading out to either the east coast or the west coast, as he hopes to make a decision as soon as he can in his junior year.

While he’s still got a lot of visits to make, midfielder Devin Pierre has made strides in his search for a college program.  “I haven't had a chance to visit all of the schools and programs that I'm interested in as a result of school and soccer commitments,” Pierre wrote in an email to TopDrawerSoccer.com. “However, I would say that I'm in the second half of the process.”

The ones he has seen – including Georgetown, Princeton, and Williams (to name a few) have really left an impression on him.
“All of the schools and soccer programs were impressive and each had its own positives and negatives.  I have several more upcoming visits before and possibly after the Academy Playoffs & Showcase in Dallas.”

Pierre’s search is shaped by academics, as he’s looking for a strong college program to further his education – but also one that fields a competitive squad in a strong conference.

While he’s not in a rush, Pierre is interested in making a decision after this June’s Development Academy Playoffs/Showcase experience in Dallas.

A blue collar player who can fill a number of spots along the back line, Joshua Butler is a relative newcomer to his college search – but has quickly gotten a lot done.

“I began the recruiting process in earnest over spring break,” he wrote TopDrawerSoccer.com in an email. “I was able to visit a number of schools and meet with several coaches. There are several schools that I have been in contact with but still need to visit the campuses. While I am excited to narrow down my choices and find the right fit, I am keeping my options open to be sure I explore a variety of schools and conferences.”

Butler has received interest from a number of programs, including Bucknell, Lafayette and Carnegie Mellon; schools that have seen him play.

He’s also looking forward to the Development Academy showcase later in the year, where he’ll get another chance to play in front of scouts and coaches.

Along with having received interest from schools, he’s made a number of visits to different schools.

“I have been so impressed with every program for different reasons,” he said. “The coaches have all been incredibly supportive and informative. I have been impressed with the professionalism of the coaches I have spoken with. They have all made me feel very comfortable and I have felt so welcome at each campus I visited. The process is exciting and overwhelming but each campus I visit solidifies my interest in pursuing my passion at the college level.”

And lastly, Butler isn’t in a huge rush to make a decision.

“I want to be certain I have given each school proper consideration,” he said. “I am working hard to schedule visits and camps and am trying to speak with coaches as early in the summer as possible so I can have all the information I need to make the right decision. I would like to make a decision by the end of the summer if possible but will take as much time as I need to find the right academic and soccer program.”