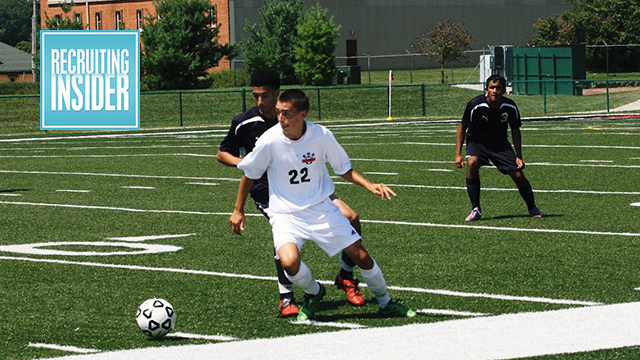 This week’s recruiting insider focuses on two standout midfielders from the USSF Development Academy and a prolific forward from one of the top high school teams in the nation.

The apple did not fall far from the tree in the Swanner family.

Tyler is more of an attacking threat than his father, and has made a name for himself in the Development Academy over the last few years.

“Tyler has been an instrumental part of our team this year,” St. Louis Scott Gallagher Metro coach Blake Decker said. “His technique, insight and skill make him a very dangerous attacking threat as he possesses the ability to expose teams via the dribble, the pass as well as finishing from distance.”

Swanner, the younger one, leads Metro in scoring this season with six goals in 13 games.

“It has been exciting, stressful, and a great learning experience,” Swanner said about the recruiting process.

“The most important factor in my college search is the coaching staff and the campus,” he added. “I’d like to be in a place where the coaches have very good relationships with their players.

“The campus is also a big factor because I want to be at a college or university where it would be the most comfortable environment for me to focus on my studies, as well as my soccer.”

The midfielder says he has a list of about 10 possible schools right now, but there is one that has always been the apple of his eye.

“My dream school is Clemson University in South Carolina,” Swanner said. “This is my dream school because my dad went to school and played soccer there. He has told me so many stories of how much fun he had attending Clemson and how great the people and the campus were.”

The 16-year-old was also really impressed by Wake Forest’s campus when he visited there.

“My goal is to find the best fit for me.”

Toward the tail end of his junior year, midfielder Troy McCartney kick-started his college search to a high gear.

That has taken him on a number of campus visits, including Penn, Loyola, Princeton and Lafayette. But by no means is he done, as he has a number of places to still check out.

He’s looking to find that blend of school and soccer.

“Some factors that I am considering in making the decision are the academics of the school, because I have put great effort into school over the years and wish to make use of the effort,” he wrote TopDrawerSoccer.com in an email. “[I’m also look at] the commitment to soccer, because I hope to go to a team that wins and does not just go through the motions, the feel of the campus, because I hope to feel comfortable where I am playing and spending my time the next four years of my life, and finally the location, because I do not wish to travel to far from home.”

With plenty of other visits coming down, the New Jersey resident is firmly focused on the Northeast region of the United States, aiming to keep his commute to school limited to a car drive.

He’s hoping to identify and make a decision by the beginning of his senior year this fall.

Mark Moulton grabs interest from colleges just like he scores goals – by the bucketful.

The junior forward from Creighton Prep and Omaha FC has attracted interest from nearly a dozen schools, but the whole recruiting process is still a novelty to him.

“I am the first Division I athlete in my family,” Moulton told TopDrawerSoccer.com. “So I am breaking new ground from a family standpoint.

“It has been fun getting to visit different programs and college talent identification camps. I enjoyed meeting and speaking with the various college coaches. It is nice to know that your talent is thought highly of by others.”

The talented striker, who netted the game-winning goal in the state championship as a sophomore, cited the rapport with the coaching staff as one of the most important factors in his search for a school.

“The most important factors for me are a good relationship and comfort level with the coaching staff, the fact that the school has the course of study I am interested in, location, school life and, of course, cost.”

The Omaha-native has narrowed down his choice, and predominantly kept the local teams at the top of his list.

“My top 3 are UNO (very intriguing- new program where the sky is the limit and Coach [Jason] Mims is great), Creighton (it has been my childhood dream to go to CU), and SLU (Coach [Mike] McGinty awesome person and coach and the history of SLU soccer is second to none).