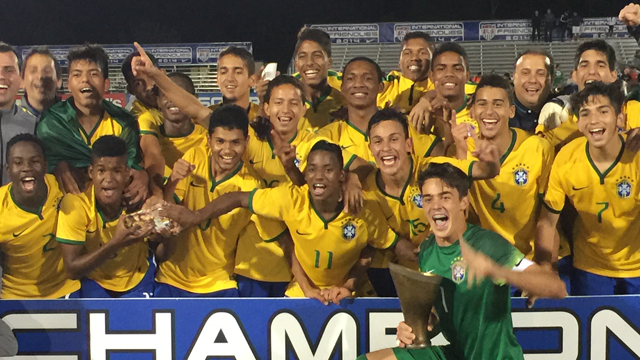 LAKEWOOD RANCH, FLORIDA – Brazil won the 2014 Nike International Friendlies on Tuesday with a 4-1 victory over the U.S. U17 Men’s National Team in the final game from the competition.

Brazil was undefeated at the event with two wins and a draw. The U.S. finished in second after wins over England and Australia. England claimed the third spot after beating Australia 2-1 on Tuesday.

Tuesday was one of the most disappointing performances in recent history for this U.S. age group. The result will sting for a while, but the lack of competitiveness in the game against a rival will be more difficult to forget.

Brazil intimidated the U.S. at every turn and ran away with control of the game from the opening seconds. The South American powerhouse held a 16-5 edge in shots at halftime.

After dominating England in the opening game on Friday and brushing past Australia on Sunday, the U.S. performance on Tuesday was unexpected and second-rate in comparison.

“It was disappointing,” U.S. U17 Men’s National Team head coach Richie Williams said. “The players didn’t show up – that’s the bottom line. They didn’t compete the way they needed to compete. They were second to everything. They were slow with the ball, slow on the defensive side of the ball. Overall, it wasn’t a good performance. Brazil played a good game and we weren’t able to match them.”

The moments of promise came early for the U.S. While Brazil peppered the area around Kevin Silva’s goal, the visitors had to wait to find the breakthrough and the U.S. had some chances.

Christian Pulisic and Joshua Perez linked up for a give and go down the left side in the early stages that led to a pass to Alejandro Zendejas, but his shot was blocked and cleared.

It was a brief moment of sunshine before the storm. Brazil struck gold in the 14th minute with a perfectly executed counter attack following a corner kick. The corner kick service did not clear the first defender and the header away opened up everything. The diagonal pass to Lincoln set Brazil into a full out sprint on the U.S. goal. Evander made a clever cutting run to the inside and Lincoln slipped him in. Evander slotted it home in the 14th minute.

The U.S. responded ten minutes later. It was the sound of a foghorn in a dance hall, but it was an answer. The play started with Tyler Adams cutting out an angled pass to the right side of the U.S. defense. Adams began his run forward that eventually led to him hitting a cross from near the touchline that sailed over everyone. Haji Wright tracked down the loose ball and beat two defenders with a bit of individual brilliance. Wright then played in Pulisic for the easy finish.

The samba music began playing again after the goal and three minutes before the break, Brazil found the game-winner.

U.S. fouled a Brazilian attacker 25 yards from goal. Brazilian standout Evander hit a beautiful free kick that went off the post and into the net.

Seven minutes into the second half, Williams began to alter his squad in search for answers on how to stop Brazil from dictating the game. Williams pulled out Perez and put on Matthew Olosunde, which moved Adams from right back to defensive midfielder.

“Tyler [Adams] was getting around the ball and at least try to move it, so that is what we were looking for [when we moved him to midfield],” Williams said. “Obviously, we were looking for a little more athleticism too with Christian [Pulisic] and Luca [de la Torre] pushed up high as we looked for goals.”

The U.S. conceded its third of the night in the 62nd minute. Silva’s attempted clearance landed at Evander’s feet and he quickly attacked the spacious U.S. defense. Evander passed it off to Andrey who picked out the lower corner of the net for his first of the game.

Williams went to the bench again minutes later and brought on McKinze Gaines for Eric Calvillo. This left the center of the field for Adams and Brazil exploited it soon after.

Andrey ripped another shot from an identical location, but the end result for this shot was the upper corner of the net.

The final 20 minutes were window dressing as U.S. hardly threatened the Brazil goal and never really found cohesion to link up passes and break down a brilliant trapping scheme from the Brazilian coaching staff.

“There were too many individuals on the field tonight and not enough guys playing for the team,” Williams said. “Again, it’s a good learning experience for the guys. When playing one of the best teams in the world, everyone has to show up. It’s not just passing and scoring goals. It’s all the little things in terms of tackles, winning second balls, winning headers, committing fouls at the right time, and we didn’t have that tonight.”

Williams and his staff have just over two months to right the wrongs of the night as the U.S. heads into World Cup qualifying on Feb. 27 in Honduras.