Breaking down the U.S. U14 BNT camp talent 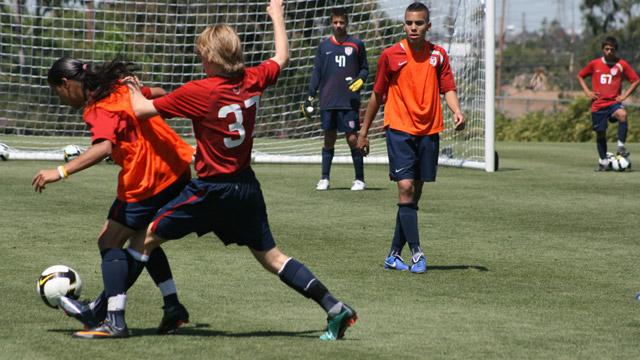 This week’s U.S. U14 Boys National Team Camp moves forward with a cast of young stars determined to shine.

“I love it how we all push each other,” said midfielder Peter Schropp. “On the field when we’re playing against one another we hate each other (competitively) a little bit. But all the players are great. It’s just fun playing at this type of level.”

Schropp and the group will get more competitive opportunity as the two-a-day trainings continue before Thursday’s scrimmages against the LA Galaxy and Cosmos West Academy.

So far, here are a few of the many standouts who have shown promising signs on the field. 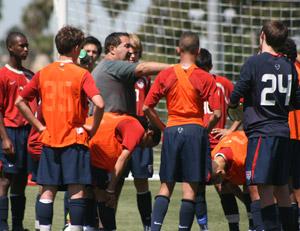 U!4 BNT campers compete in Carson, CA.
Collin Fernandez, of Chicago Fire Academy, is an exciting player to watch. He has a great feel for the game and natural instincts that make him a player who could have a bright future. Coach Manny Schellscheidt spoke of trying to get the young players to express themselves with the ball on Monday, and Fernandez is the kind of player who is already on that path. He showed off good decision-making, passing and ball control during separate training sequences.

Cameron Lindley possesses good size and is crafty with the ball as a midfielder. He’s strong moving downhill against an attacker and appears to have an advanced game. Lindley is a member of Indiana United Soccer Club.

Defender Malcolm Jones has a good athletic build and appears to be strong in battling on the ball. Because the earlier trainings consisted of more 6v6 and the field was opened up, James didn’t get a chance to truly show off his defensive ability but the signs were there. He is also capable of playing good balls out of the back, when patient.

Defender Tommy Redding has some of the best physical tools of the group. He already stands at 5-foot-10 and is truly fluid with the ball. It’s easy to see that Redding can move the attack forward from the back and he showed off good striking ability as well. If Redding has any future ambitions of transitioning to a forward, it wouldn’t be a difficult move for him.

Goalkeeper James Marcinkowski, of Mustang SC, is a very mobile and athletic keeper. He has little problem coming off his line or making quick lateral saves. It’s not difficult to imagine Marcinkowski excelling at a position other than keeper.

Goalkeeper Parker Siegfried, of Newark Area SA, is really pretty polished for his age. He knows how to make himself big in goal and anticipates well. Siegfried looks as though he’s had some quality technical work.

Big things in small packages: There is a good group of small but talented and entertaining players to keep an eye on this week. Alejandro Vergara (Cosmos Academy West), who stands just 4-foot-7, along with five-foot attackers Benjamin Swanson and Shannon Seymour are each shifty and very dangerous with the ball at their feet. Each should stand tall throughout the week.