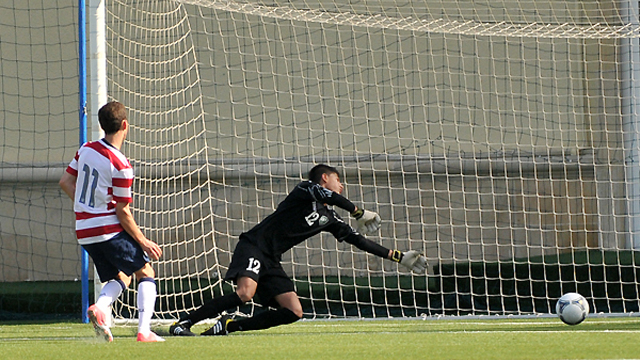 The U.S. U17 Men’s National Team, composed of players born in 1997, finished up its play at the Caspian Cup in Azerbaijan on Tuesday with a 5-2 win over Uzbekistan. Real Salt Lake Academy attacker Brooks Lennon scored four goals in the win including three goals in two minutes in the second half. Lennon finished the competition with seven goals from the four games – he also had a hat trick in the 11-0 win over Kyrgyzstan.

Lennon was not the only player who played well for the U.S. during the competition, as the team coached by Jim Rooney enjoyed a strong showing in all of the matches and was unlucky not to pull off an undefeated record with a 2-1 loss to host Azerbaijan being the lone negative mark for the Americans.

This group is likely going to be the cornerstone of the U18 Men’s National Team next year and moving into 2015 before it transitions into the U20 MNT for the 2017 World Cup cycle. A few key players did miss out on the trip, namely Cameron Lindley, Coy Craft, and Kyle Scott.

So who did well in Azerbaijan?

D Tommy Redding, FC America Viper: The center back who featured regularly with the U.S. U17 MNT during qualifying looks to be finally recovered from injuries. Redding, alongside Justen Glad, anchored down the center of the defense and helped make the job easy for James Marcinkowski and Jake Gelnovatch in net.