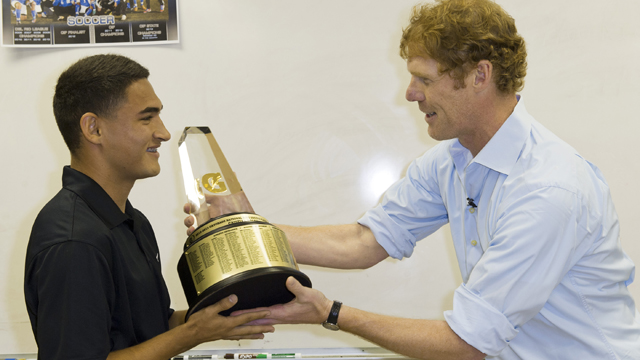 When he was nine years old, the youngster was cast in an adidas commercial, which portrayed a child acquiring grocery bags in order to make a soccer ball. 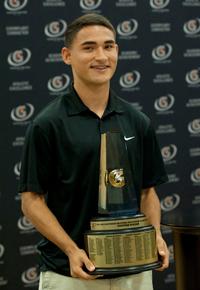 A decade later, Roldan was once again the star in front of the camera and bright lights, as the teenager was awarded the Gatorade National Boys Soccer Player of the Year on Monday.

The Washington commit scored 54 goals and recorded 31 assists in his senior season while leading his high school, El Rancho, to a CIF Southern Section Division III championship and a CIF Southern California Division I Regional championship. The El Rancho Dons finished the season with a 29-2-1 record.

Former U.S. Men’s National Team defender Alexi Lalas surprised Roldan in class with the award, but the savvy soccer player was pretty quick to figure out what was going on as soon as Lalas walked in the room.

“He told me that he watched last year’s award presentation, so the association was there that there was a good chance that he had won when I showed up,” Lalas told TopDrawerSoccer.com.

Last year, Lalas surprised Emmanuel Boateng with the award during class at Cate School (Carpinteria, California). Boateng went on to be one of the top freshmen in the country while playing for UC Santa Barbara in the fall.

Roldan will be hoping to fill similar shoes as he heads to the Pacific Northwest to join Jamie Clark’s Washington side, which is coming off an NCAA Second Round appearance in 2012.

“He is going to go to an environment where players are better and faster,” Lalas said when asked for advice for Roldan. “The typical stage where players question whether they are good enough. Don’t let the inevitable development that needs to happen, freak you out. It happens to everybody. If you are good enough, you will become even better and more successful because you are being challenge. Don’t be afraid to be challenged.”

Roldan has met and exceeded challenges put in his path in the past, as the high school standout carried a 3.39 grade point average during his high school career as well as donating his time to the Blue Pride project.

“I go to these things and do a little reconnaissance before I present the award,” Lalas said. “I want to know the good, the bad, and the ugly – I couldn’t find anyone to say a bad thing about him. You see how everyone lights up when they talk about him. It’s not just about the soccer – the academics and the community is part of it too. I am confident we are sending out a great soccer player and a great person.”

Roldan became the fourth player from California to win the title in the 28-year history of the prestigious scholastic award. Jordan Harvey, Greg Dalby, and Boateng were the previous winners.

The El Rancho standout is the first Washington commit to collect the award for soccer. The Huskies have had four athletes win the trophy for other sports prior to heading to the picturesque Seattle campus.