Canada tops U.S. in U18 friendly in SoCal 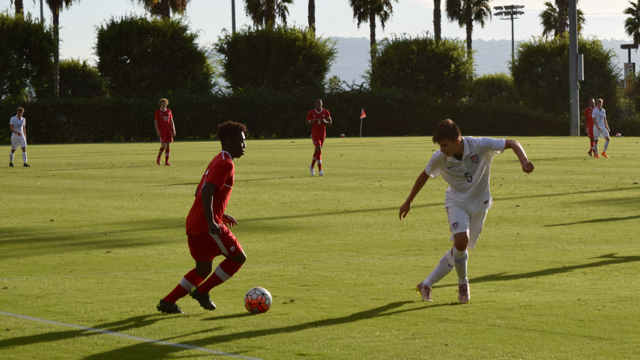 CARSON, California - The U.S. U18 Men’s National Team lost 3-2 to Canada on Sunday as part of a two-game friendly series in Southern California between the two CONCACAF squads. The U.S. beat Canada 3-1 on Friday in the first friendly of the October camp. Nebiyou Perry scored twice on Friday while Nick Taitague had the other. Justin Rennicks and Taitague scored on Sunday.

The U.S. struggled for much of the first half on Sunday. Canada’s pace on the wings made life difficult on the two U.S. outside backs. Many of the chances for the visitors came from quick play that sliced through the midfield and set the attacking talent of Canada in on goal The U.S. struggled to get a hold of the game until the second half, which left little time remaining in the game and limited opportunities in the attack.

Canada opened the scoring in the fourth minute when  Glenn Muenkat sliced open the right side of the U.S defense and pulled the trigger from the corner of the 18-yard box. Goalkeeper Carlos Mercado could not put his gloves on the shot and it hit the lower corner of the net.

The visitors pushed for another goal with Adonijah Reid who had a number of chances in the first half to extend the lead for Canada. Reid hit the post in the 10th minute and then had a look at the rebound but Mercado made a good save.

Reid hit the post again in the 13th minute as the onslaught from the Canada attack had much of the opening 15 minutes played on the U.S. half of the field. The U.S. defenders did not cope with the pace of the wingers, which kept the attack rolling.

U.S. had a good look at an equalizer in the 20th minute when Justin Rennicks slipped in a pass for Nebiyou Perry. The shot from Perry, who made a good run to split the right back and center back, went well over the cross bar.

The U.S. found the equalizer in the 30th minute when Carson Vom Steeg went direct with his service and hit an excellent pass into the path of Griff Dorsey, who took a touch and then finished over the goalkeeper and into the net.

Jose Carranza nearly gave the U.S. the lead minutes later when Perry played a pass back to him at the top of the box. Carranza’s effort went off the post and was cleared of danger.

Canada had the last look of the first half when the right winger beat the U.S. defense down the side again. Mercado did well to push the attacker into a tough angle for a shot.

U.S. had the better spell of play at the start of the second half, but Canada scored first. Canada struck from distance on a shot from Alphonso Davies that skipped past Mercado and into the goal.

U.S. answered back in the 69th minute when Lucas Del Rosario was taken down 30 yards out from goal in the center of the field. The U.S. orchestrated a well-designed set piece play for the chance. The play ended up with Nick Taitague getting a shot from 15 yards out. Taitague finished his chance to put the U.S. back on level terms with Canada.

Canada scored in the 90th minute to win the game. Muenkat scored his second of the game on a bit of a lucky bounce. The winger was in the right place on a cross from the right side, but his first touch let him down. The U.S. tried to clear the loose ball in the box, but the clearance hit off of Muenkat’s midsection and went into the goal.

The teams split the two-game series. Muenkat finished as the top scorer with three goals from the two games.