Chang, Pfeffer display talent and desire at US U14 camp 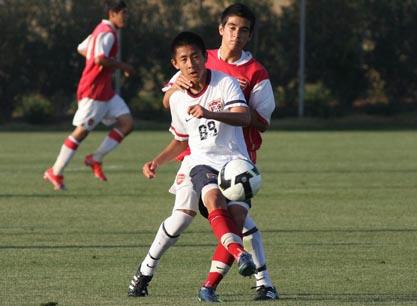 Zachary Pfeffer and Michael Chang share an awful lot in common. Both are standout midfielders for the US U14 Boys National Team, and both are motivated and enhanced by close siblings who also excel in the game.

Not to mention that both US soccer veterans stood out amidst a collection of talent this past week at the US U14 Boys National camp at the Home Depot Center in Carson, California. 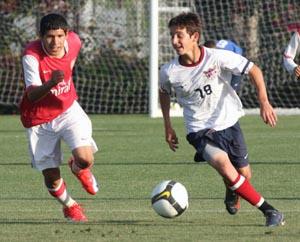 Zachary Pfeffer (white) at the recent U14 camp. Photos courtesy of Lawrence Shin.
Chang, a 5-foot-8 midfielder, is an aggressive player with good feet. He played his comfortable position this week, which he also plays for his Chicago-area Sockers FC, after playing on the back line in past gatherings and during the team’s January camp in Mexico.

Chang is motivated and aided by his brother Andrew, two years his elder, and a standout national pool player himself.

Michael arrived at the camp sharp and prepared to play, even though he admits he needed to make adjustments during the week.

“The first game I played the team was much bigger and stronger than us and the physical play was tough,” Chang said. “In the second game we were used to it and performed better. The training has mostly been the same but I think I’ve done pretty well.”

Pfeffer recorded a goal and an assist in one scrimmage and was a force with his technical ability and understanding of the game.

Pfeffer, who also made the trip to Mexico in January along with teammates Zackary Steffen, Dylan Greenberg, Emerson Hyndman, Paul Arriola and Kellyn Acosta, has a twin brother Jared. Both star for YMS Celtic in Eastern Pennsylvania and sharpen each other’s skills.

Pfeffer is used to measuring himself against other players, as he finds himself doing during the weeklong national trainings.

“I think you have to,” he said. “You have to know what you need to work on and how you compare. I think I had a good camp. The first game I wasn’t as strong as I wanted to be, and the coach talked to me about some things and he said he liked what he saw from me the second time around. Every time you come out to these you have to work your hardest and compete all the time.”

Both players will likely be competing in youth national camps for the foreseen future, but that doesn’t mean either will ever be satisfied.

“Everyone needs to improve, no one has ever arrived,” Chang said. “It’s good to come here and learn how to get to the next level.”