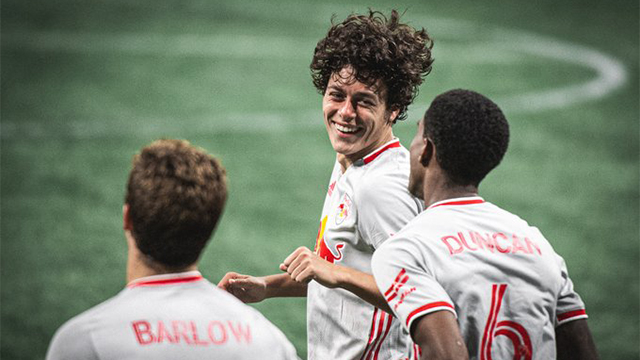 It was quite the Saturday for Caden Clark.

The former Barca Academy standout and New York Red Bulls II player was officially announced as an addition to the Major League Soccer team on Saturday morning, ahead of the match against Atlanta United. Clark slotted straight into the starting lineup, scoring his first MLS goal as the Red Bulls hung on for a 1-0 win on the road at Atlanta.

From a global perspective, few things have gone right in 2020. But Clark has managed to progress his career. Previously with Barca Academy, the Minnesota native joined Red Bulls II in the USL Championship at the start of the year. After a long layoff, when games started going forward, Clark started performing very well in the USL Championship. That obviously caught the attention of the Red Bulls brass, and was signed by the Red Bulls last week after they sent Allocation Money to Minnesota United for the player’s territorial rights.

Overall, Clark’s goal highlighted a solid, but relatively quiet performance. He was involved minimally in his hour-long shift, attempting just 15 passes. He did create a chance and fared relatively well overall, punctuated by a nicely finished goal that stood up as the game winner.

With Clark starting at right mid, there were several battles between him and George Bello. The 18-year-old left back had struggled prior to 2020, but despite his team overall being a bit of a train wreck, Bello’s one of a handful of Atlanta United players potentially boosted his stock during the season. And part of that can be attributed to how poor Bello looked at the Under-17 World Cup last year, though there’s clearly been a mentality shift for the teenager.

Much has been made about the potential from players in the LAFC Academy. But the first team has yet to see that impact, although Christian Torres continues to earn minutes from the bench.

In Sunday’s 3-1 win against the Seattle Sounders, Torres entered in a big spot in the 45th minute. With his team up just 1-0, and relatively shorthanded in the attack, the 16-year-old forward was deployed on the wing by his head coach Bob Bradley.

And while there were no eye-popping moments, his 45 minutes on the field did nothing to indicate that he shouldn’t continue to at least factor in as a depth piece. Of course, that becomes more of a difficult task when the likes of Carlos Vela and Diego Rossi are available. But given his age and the lack of any sort of reserve team, and it’s encouraging to see Torres making the most of his chances.

In Sunday’s 2-1 win against D.C. United, Chicago Fire Homegrown left back Andre Reynolds entered as a 75th minute substitute, making his second league appearance. This was essentially his debut, as he came on as a stoppage time replacement for the Fire back in September against Atlanta United.

There’s still not enough data on Reynolds, who continues to serve as a backup for Jonathan Bornstein, to get a true sense of his potential. But it continues the trend of young players getting chances thanks to a tremendously congested late-season schedule.

Against D.C., Reynolds didn’t face too much pressure. His passing numbers weren’t phenomenal, but a part of that is down to the state of the game, where he was looking to clear danger or head long balls towards him clear. He wasn’t beaten on any individual moments as well, as the Fire locked up the win.